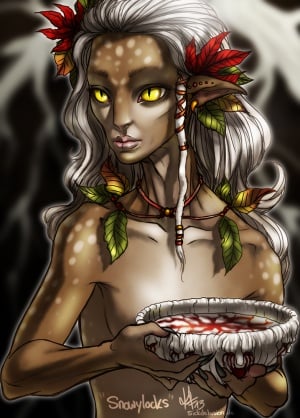 Weirwood paste is a paste of weirwood seeds and sap. It is made by the children of the forest.[1]

Bran Stark trains as a greenseer with Lord Brynden, the three-eyed crow, in a cave beyond the Wall. To enhance Bran's gift, Leaf and Snowylocks give the youth a bowl of thick weirwood paste to eat. The bowl has a dozen faces carved like a heart tree. The white paste has red veins, which Bran supposes are only weirwood sap, though in the torchlight they look like blood.[1]

Bran's reaction to the paste's taste is similar to the reaction Daenerys Targaryen had upon drinking shade of the evening in the House of the Undying.[2] The weirwood paste at first tastes bitter, then better, then almost sweet, tasting of honey, new-fallen snow, pepper and cinnamon and the last kiss Bran's mother Catelyn ever gave him.[1]

With the cave's torches extinguished by the children of the forest, Brynden has Bran slip his skin into the weirwood roots instead of Summer, Hodor, or ravens. Bran then has visions of past events which occurred at Winterfell.[1] 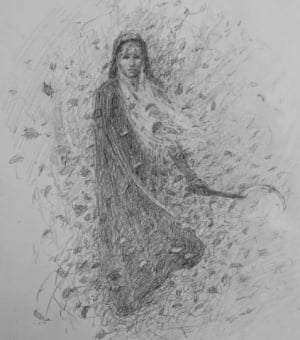 One of the visions seen by Bran Stark - by Marc Fishman ©

Bran: Will this make me a greenseer?
Brynden: Your blood makes you a greenseer. This will help awaken your gifts and wed you to the trees.[1]