From A Wiki of Ice and Fire
Jump to: navigation, search
Not to be confused with Gared Tuttle, a character from Game of Thrones - A Telltale Games Series.

Gared is a ranger of the Night's Watch. In the television adaptation Game of Thrones, he is portrayed by Dermot Keaney.[4]

Gared is past fifty. He lost both ears, three toes and the little finger of his left hand to the cold.[1] Old and scrawny,[2] he is considered an experienced ranger.[5] The man-at-arms is known to make fun of Ser Waymar Royce because of the fine clothes the inexperienced lordling wears.[1]

Gared joined the Night's Watch as a boy and spent forty years as a ranger. When Gared's ears had frostbite one winter, Maester Aemon had to cut them off.[1]

Shortly before A Song of Ice and Fire starts, Gared, Will, and Ser Waymar Royce were sent ranging into the haunted forest by Jeor Mormont, Lord Commander of the Night's Watch, in search of a band of wildling raiders. Jeor gave the command to Waymar, although he was the least experienced of the three, whereas Jeor counted Gared and Will among his best men. However, Waymar felt it was his due to have a command because he was a knight, and the Lord Commander accepted because he did not want to offend Waymar's father, Lord Yohn Royce.[5] 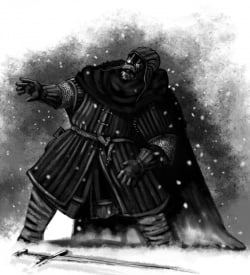 Gared, Will, and Ser Waymar Royce follow the wildlings, finding them dead on the ninth day. Gared wants to return to the Wall, but Waymar insists they discover what killed the wildlings. Gared says he can feel that something is wrong, but Waymar dismisses the suggestion. He mocks the experienced ranger repeatedly, making Gared increasingly angry. Waymar orders Gared to remain with the horses while he and Will walk the last part. Waymar refuses to allow Gared to make a fire. After Waymar is slain by Others, the knight rises as a wight and kills Will.[1]

A terrified[6] Gared deserts the Night's Watch and flees south of the Wall, but he is arrested outside a small holdfast in the hills near Winterfell. He is questioned by Lord Eddard Stark, but Eddard's words do not reach the ragged and distraught Gared.[2][7][8]

For his desertion, Gared is sentenced to death by Eddard, who performs the beheading himself with the greatsword Ice, in accordance with the traditions of the First Men. Afterwards, Theon Greyjoy laughs and kicks Gared's head when it lands near his feet, provoking Jon Snow's disapproval.[2] Eddard sends Gared's head to Jeor Mormont, Lord Commander of the Night's Watch.[5]

While Jeor tells Tyrion Lannister about the conditions on the Wall, he mentions the ranging on which Will and Waymar went missing. Jeor laments giving the command to someone as inexperienced as Waymar. Jeor mentions that Gared had been longer at the Wall than himself and that he would never have believed the man would turn.[5]

Craster tells Jeor that the three rangers stopped at Craster's Keep during their search for raiders.[9] Dermot Keaney as Gared in Game of Thrones

We should start back. The wildlings are dead.[1]

Everyone talks about snows forty foot deep, and how the ice wind comes howling out of the north, but the real enemy is the cold.[1]

Robb: The deserter died bravely. He had courage, at the least.
Jon: No. It was not courage. This one was dead of fear. You could see it in his eyes, Stark.[2]

The poor man was half mad. Something had put a fear in him so deep that my words could not reach him.[7]

In the television series Game of Thrones, the roles of Gared and Will are swapped. Gared is beheaded by a White Walker, and Will flees south until he is captured and executed.[10]