A Clash of Kings-Chapter 38

Tywin Lannister’s host is leaving Harrenhal. Arya has been kept busy delivering messages for Weese, and she wants to find Jaqen H'ghar before he leaves. She finally finds Jaqen and gives him Weese’s name. As she watches Tywin Lannister lead his host out of the castle, she realizes that she has been targeting the wrong people, people who really do not matter. She goes in search of Jaqen, but finds Weese’s dead body first. 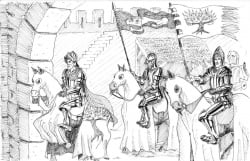 The Castle is in an uproar with preparations for Tywin Lannister’s host’s departure. Ser Addam Marbrand was the first to depart, a day before the rest. Weese calls Ser Addam a great horseman and sword fighter, and Lord Tywin’s most daring commander. Arya hopes Ser Addam and all his men die. She is sure that they are going to fight Robb Stark, and wonders what Robb has accomplished.

Arya has been kept busy running messages from dawn to dust. She has even delivered messages beyond the wall, and considered running away except that Weese told her he would deliver her to Vargo Hoat; maybe if Weese were dead. Weese does not know Arya can read, so he never seals his messages. That day, she delivers a message demanding payment for a debt to a knight who cannot read. She reads it to him, and he tries to hit her so she takes a silver banded drinking horn from him and flees, giving it to Weese. For this Arya is promised the reward of sharing a crisp capron with Weese that night. As she runs errands, she searches for Jaqen H'ghar to give him another name before he leaves. She finally asks a gate guard and is told that Ser Amory Lorch is to be castellan of Harrenhal, so Jaqen will not be leaving. The Brave Companions will also be left to do foraging. Unfortunately, the Mountain will be leaving to command Tywin’s van in battle, putting him, Dunsen, Polliver, and Rafford beyond reach.

Weese gives Arya a message for Lucan that Ser Lyonel, who is to ride with Kevan Lannister, needs a new sword. When she reaches the armory she spies Gendry and asks him which one of the men is Lucan, he tells her that Hot Pie asked him if he heard her scream Winterfell when they were fighting on the wall. Arya immediately claims she didn’t and Gendry tells her she did, but that he told Hot Pie he needs to clean out his ears because she yelled “Go to hell” and she better have the same story; she does not want Hot Pie to know who she really is, and thinks maybe she should give Jaqen his name. Gendry gets Lucan, who pulls down a longsword and gives it to Arya with the message that it is too good for such an oaf. Arya claims she will pass on the message, but will not because Weese would beat her bloody. The longsword feels good in Arya’s hand, although a lot heavier than Needle, and she thinks that she may not be a Water Dancer but she is not a mouse either. She considers using the note to get a horse, pretending she is doing it for Ser Lyonel since the stableboys are not able to read.

She is trying to decide whether to take the chance when she overhears some archers talk. One says that Robb brought giants from the north, another that Starks are more like wolves than men, and then one states that Robb is scared to attack Harrenhal, and would piss in his pants if he knew they were coming. One man comments that maybe they are the ones that should run. She thinks that yes, they should run or her brother will kill them. She is interrupted by Weese, who has come up in front of her and she did not see him. He complains that she took long enough, and snatches the sword from her, slapping her with the back of his hand and telling her next time she will be faster. She was a wolf and suddenly is not. He asks her if she wants another slap, and tells her he wants none of her insolent looks, and to tell Tuffleberry he has barrels for him but he needs to send lads to fetch them. He then warns her to run if she wants to eat tonight, and not to get lost again or she will be beat bloody. Halfway to the brewhouse, she runs into Rorge and three other of Ser Amory’s men. He calls her “Yoren’s little cunt” and recalls that he promised to fuck her with her stick, saying she is no longer so brave now that he is not wearing chains. When she tells him she is looking for Jaqen, she can see something in his eyes, possibly fear. He tells her he is in the bathhouse and to get out of his way. In the bathhouse, she tries to sneak up on Jaqen, but he knows she is there, telling her the scuff of leather on stone is as loud as warhorns to a man with open ears, and clever girls go barefoot. She is upset that he heard her, and whispers Weese’s name in his ear. He states that a man will attend him at his leisure.

She gives Tuffleberry the message and he curses, saying his lads are busy and that he will have those barrels within an hour, or Lord Tywin will hear of it. Weese is not happy about this message, but finds six men.

Supper is a thin stew, and Weese shares his capon with a woman who has been sleeping with him. When he sees Arya staring, he reminds her he told her what would happen if he caught her staring. He slaps her, then shoves her and her dress catches on a loose nail and rips. Weese commands her to fix that before she sleeps.

She is kicked awake in the morning by Weese, who tells them that the work will not get easier now that Tywin’s host is gone. Later, Arya watches as Lord Tywin and Ser Kevan pass, followed by their great lords and captains. Last comes Gregor Clegane, with Polliver beside him wearing Gendry’s helmet. Suddenly Arya realizes she was stupid and that neither Chiswyck nor Weese mattered. Why didn’t she say Lord Tywin? She hurries to find Jaqen to tell him.

She hears a shriek of pain, and finds a dozen people looking at the body of Weese with his ugly dog on his chest. Every so often the dog rips a mouthful of flesh off his face. One man exclaims that he had that bitch since it was pup, and it must be Harren’s ghost. When Arya lifts her gaze, she sees Jaqen on the battlements, who casually lays two fingers across his cheek.