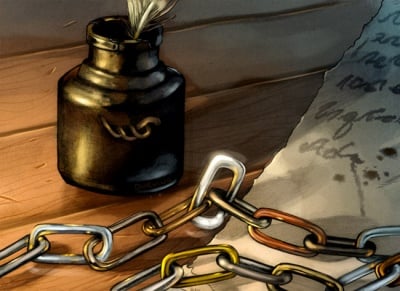 The maesters are an order of scholars, healers, scientists, and postmen. Most historical accounts claim that King Urrigon Hightower granted lands alongside the Honeywine to the wise men, teachers, priests, healers, singers, wizards, alchemists, and sorcerors who had been invited to Oldtown by his younger brother Peremore. There, the Citadel was eventually constructed, where the maesters perform their studies and teach their students.

The Citadel is led by the archmaesters, maesters who have become experts in a specific topic. The archmaesters teach their topic of expertise to their students, who can go before the archmaesters and demonstrate their knowledge when they believe themselves to be sufficiently trained. When the student indeed has sufficient knowledge, he earns a link for his maester's chain (pictured). The collar is supposed to remind a maester of the realm he serves. The chain is never removed, and being forced to surrender the chain is considered a great shame.

Lords pay the Citadel to have a maester in their personal service. Having a maester in their service will increase a lord's social status, as lords are considered to be of little consequence if they cannot afford the service of a maester. Upon completion of his education at the Citadel, a maester takes his vows and puts aside his House name (if he had one). A maester is supposed to be loyal to the seat to which he is assigned, regardless of the changes in (lawful and unlawful) control of that holding.