Lord of Sharp Point[1][2][3] is a title held by the head of House Bar Emmon, the ruler of the Sharp Point in the crownlands.[1] 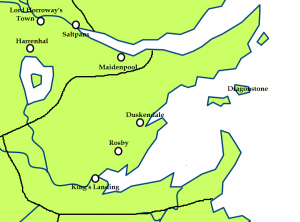 Sharp Point
The crownlands and the location of Sharp Point

Prior to the War of Conquest, House Bar Emmon was sworn to House Durrandon, the Storm Kings from Storm's End, but had closer ties to House Targaryen of nearby Dragonstone. When Aegon the Conqueror launched his invasion of Westeros, Lord Bar Emmon supported him instead of the Storm King, Argilac the Arrogant. With the creation of the crownlands after the Conquest, the Bar Emmons became sworn directly to Dragonstone, instead of House Baratheon of Storm's End, who had replaced the Durrandons.[4]

When the realm began to turn against King Maegor I Targaryen for his nephew Prince Jaehaerys, Lord Bar Emmon was among the score of lesser lords who gathered at his command.[5] However, when Maegor mysteriously died upon the Iron Throne, Lord Bar Emmon fled back to Sharp Point.[6] Lord Bar Emmon was one of the first lords who traveled to Dragonstone to speak with Jaehaerys I during his minority.[7]

During the Dance of the Dragons, Lord Bar Emmon was a member of Queen Rhaenyra Targaryen's black council.[12] After the greens' victory at the Battle of the Honeywine, he suggested for Rhaenyra to bend the knees to King Aegon II Targaryen, but the queen dismissed his advice.[9][13]

Lord Bar Emmon remains loyal to King Stannis after the defeat at the Blackwater and sends men with the king on his journey to the Wall.[15]