From A Wiki of Ice and Fire
(Redirected from The Red)
Jump to: navigation, search 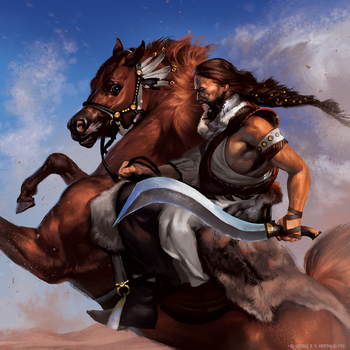 Drogo's stallion, sometimes referred to as "the red", is the steed of Khal Drogo. It has no name due to the Dothraki being an unsentimental people.

Khal Drogo rides his lean red stallion to greet Daenerys Targaryen.[1] After Drogo becomes ill, he falls off his great red stallion.[2] Mirri Maz Duur puts Drogo into a bath, and has his stallion brought into the tent so she can use its blood. Rakharo, Quaro, and Aggo force the screaming stallion to the tub, despite the horse being frightened by the stench of death. Mirri Maz Duur chants, then uses a red bronze knife covered in glyphs to cut the horse's throat so the blood fills the tub.[2] Later, as Daenerys walks into Drogo's funeral pyre, she glimpses Drogo on his smoky stallion for just a moment.[3]