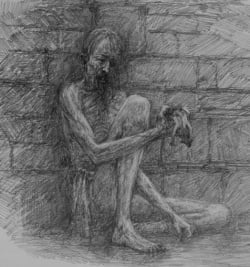 Big Walder and Little Walder enter a cell in the dungeons of the Dreadfort. Cowering before them is a weak and foul-smelling man, who knows his name is Reek - but that he once had another name.

Reek is so weakened and mentally ravaged that he is terrified of the two eight year old Freys. He remembers his attempt to escape with the bedwarmer Kyra, but that had been a ruse by Ramsay Bolton for his own amusement. Kyra had suffered horribly at the hands of Ramsay's dogs, and Reek has lost several of his own fingers and toes through agonizing flayings at the hands of the Bastard's Boys.

The Frey boys bring Reek before Ramsay, who is with Arnolf Karstark and Hother Umber. Ramsay taunts him in front of his guests. The reader learns that Reek is Theon Greyjoy when Arnolf Karstark recognizes him as "Stark's ward". In his degraded state, Reek thinks of him as a merciful and kind master. Ramsay promises him a bath, since he rides to war, and needs Reek's help to bring home his virgin bride.