Mago is a dothraki rider in the khas of Ko Jhaqo.

In the television adaptation Game of Thrones, Mago is portrayed by Ivailo Dimitrov.

When Khal Drogo's khalasar destroys a Lhazareen settlement, Mago begins raping a woman, Eroeh, until she is rescued by Daenerys Targaryen.[1]

After Drogo falls ill, Jhaqo declares himself khal and names Mago a bloodrider. Mago then steals Eroeh back and rapes her. He gives her to Jhaqo and she is raped again by him and his other bloodriders. When they are done, they cut her throat. Upon hearing of Eroeh's fate, Daenerys promises that Mago's fate will be more cruel, and swears that Mago and Jhaqo will plead for the mercy they showed Eroeh before she is done with them.[2]

While in the Dothraki sea, Daenerys recalls her promise to kill both Jhaqo and Mago before being discovered by their khalasar.[4]

Rakharo: They took Khal Drogo's herds, Khaleesi. We were too few to stop them. It is the right of the strong to take from the weak. They took many slaves as well, the khal's and yours, yet they left some few.


Jhogo: Mago seized her, who is Khal Jhaqo's bloodrider now. He mounted her high and low and gave her to his khal, and Jhaqo gave her to his other bloodriders. They were six. When they were done with her, they cut her throat.[2]
—Rakharo and Jhogo to Daenerys Targaryen 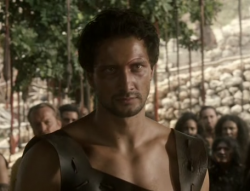 Ivailo Dimitrov as Mago, in Game of Thrones

George R. R. Martin has revealed that Mago is still alive in the books and he will have a recurring role in The Winds of Winter.[5]