From A Wiki of Ice and Fire
(Redirected from Night's King's corpse queen)
Jump to: navigation, search

The corpse queen was the legendary consort of Night's King from the Age of Heroes.[1][2] Her given name is unknown.

The corpse queen is said to have had cold, white skin and eyes like blue stars.[1] 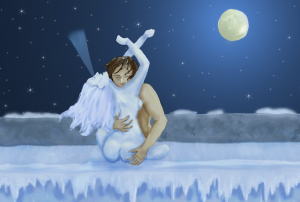 The Night's King makes love to his queen, by Curtana ©

According to legend, Night's King lived during the Age of Heroes, not long after the Wall was complete. He was a fearless warrior who served as the thirteenth Lord Commander of the Night's Watch. After viewing the white-skinned woman from atop the Wall, he chased and loved her. Night's King brought her back to the Nightfort and after the unholy union, he declared himself king and her his queen.[1]

Night's King ruled the Nightfort as his own castle for thirteen years. During the dark years of his reign, horrific atrocities were committed, of which tales are still told in the north. It was not until Brandon the Breaker, the King of Winter, and Joramun, the King-Beyond-the-Wall, joined forces that Night's King was brought down and the Night's Watch freed.[2] After his fall, when it was discovered that Night's King had been making sacrifices to the Others, all records of him were destroyed and his very name was forbidden and forgotten.[1]

Maesters are skeptical of the legend, thinking the corpse queen was possibly a daughter of a Barrow King from the barrowlands, who were often associated with graves and burials.[2]

Some reader theories associate the corpse queen with the Others because of her description.

A woman was his downfall; a woman glimpsed from atop the Wall, with skin as white as the moon and eyes like blue stars. Fearing nothing, he chased her and caught her and loved her, though her skin was cold as ice, and when he gave his seed to her he gave his soul as well. He brought her back to the Nightfort and proclaimed her a queen and himself her king, and with strange sorceries he bound his Sworn Brothers to his will.[1]