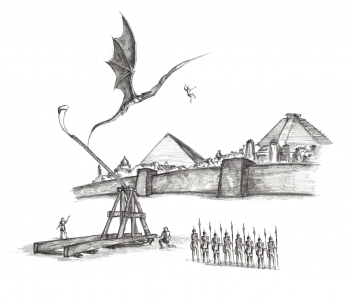 Three hundred yards away the Wicked Sister swung her arm, chunk-THUMP, and six fresh corpses went dancing through the sky. Up they rose, and up, and up. Then two burst into flame.[5]

Crossbows is how you hold the Wicked Sister. Scorpions. Mangonels. That's what's needed. You do not use mounted men to defend a fixed position.[5]