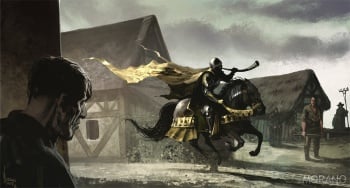 A bannerman is a vassal who owes military service to his lord under the feudalism of the Seven Kingdoms of Westeros. 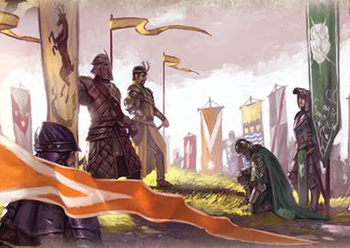 Bannermen can act in their own self-interest,[6] sometimes to the detriment of their liege.[7] Disgraceful actions by a bannerman can bring shame on his liege[8] and homeland.[9] Bannermen can test new lords to judge their worth.[6] Some liege lords pit their bannermen against each other to keep them weak.[10]

As part of peace efforts, bannermen can be asked to send their kin to to serve as hostages.[11] The families of bannermen can also befriend those of their liege.[12]

Balon Greyjoy rebelled because he did not believe that King Robert I Baratheon had strong support from his bannermen. The other Great Houses did answer the king's call to arms, however, and Robert crushed Greyjoy's Rebellion.[13]

You cannot afford to seem indecisive in front of men like Roose Bolton and Rickard Karstark. Make no mistake, Robb—these are your bannermen, not your friends.[14]

Catelyn: Expect nothing of Walder Frey, and you will never be surprised.


Catelyn: Some men take their oaths more seriously than others, Robb.[15]
—Catelyn Stark and Robb Stark

He had assumed the promise of ten thousand jars was a wild boast, like that of the bannerman who vows to marshal ten thousand swords for his lord and shows up on the day of battle with a hundred and two.[16]

My father once told me that some men are not worth having. A bannerman who is brutal or unjust dishonors his liege lord as well as himself.[17]

Good men and true will fight for Joffrey, wrongly believing him the true king. A northman might even say the same of Robb Stark. But these lords who flocked to my brother's banners knew him for a usurper. They turned their backs on their rightful king for no better reason than dreams of power and glory, and I have marked them for what they are. Pardoned them, yes. Forgiven. But not forgotten.[18]

Every great lord has unruly bannermen who envy him his place. My father had the Reynes and Tarbecks, the Tyrells have the Florents, Hoster Tully had Walder Frey. Only strength keeps such men in their place. The moment they smell weakness ... during the Age of Heroes, the Boltons used to flay the Starks and wear their skins as cloaks.[19]

A son has a duty to obey his father, true, but a bannerman must obey his overlord.[20]