The captain's sister is a resident of Duskendale. She is the sister of the captain of the guardsmen at the town gatehouse. Her name is not mentioned.[1]

She has dark hair and a cheerful manner, and is a talented painter. She lives at a house with gorgeously painted double doors, across from the Seven Swords inn. The only castle she has ever seen is the Dun Fort.[1] 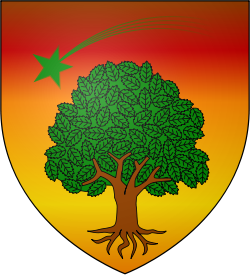 At Duskendale's gates, as the guardsmen are waving travelers through, the captain's eyes linger on Brienne of Tarth's oaken shield. He comments that it bears the black bat of House Lothston, and that they are arms of ill repute. Brienne explains that the arms are not hers, and that she means to have the shield repainted. The captain recommends his sister to Brienne, as she is a painter.[1]

Upon entering the town, Brienne soon locates the captain's sister's house. The double doors on the house are beautifully painted. They show a castle in an autumn wood, with trees in shades of gold and russet. Ivy crawls up the trunks of ancient oaks, and even the acorns have been painted with loving care. Brienne peers more closely, and sees that there are also creatures in the foliage; a sly red fox, two sparrows on a branch, and behind those leaves the shadow of a boar.[1]

When Brienne meets the captain's sister, she asks her which castle is in the painting. The woman replies that the castle is all castles, as she made it up in her head, having never seen any castle but the Dun Fort.[1]

Upon seeing the Lothston bat, the captain's sister's cheerfulness falters, and she tells Brienne of Mad Danelle. When she asks Brienne what should take its place on the shield, Brienne does not want to use the arms of House Tarth, as many believe her to have murdered Renly Baratheon. Instead, Brienne tells her that her doors reminded her of an old shield she once saw in her father's armory. Brienne describes those arms to the captain's sister, unaware that it is the sigil of Ser Duncan the Tall.[1]

The next day, the captain's sister brings the repainted shield over to Brienne in the Seven Swords common room. Brienne is very pleased with the beautiful repainting, and pays her fifty percent more than the sum they agreed upon.[1]

Brienne: Your door is very pretty. What castle is that meant to be?
The captain's sister: All castles. The only one I know is the Dun Fort by the harbour. I made t'other in my head, what a castle ought to look like. I never seen a dragon neither, nor a griffin, nor a unicorn.[1]