From A Wiki of Ice and Fire
(Redirected from Sky cell)
Jump to: navigation, search 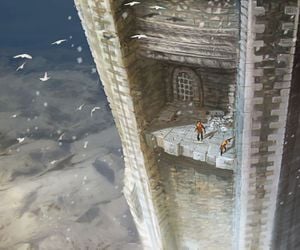 The sky cells are the infamous dungeons of the Eyrie, the seat of House Arryn high on the Giant's Lance. Mord is the gaoler in charge of the upkeep and maintenance of the sky cells.[1] 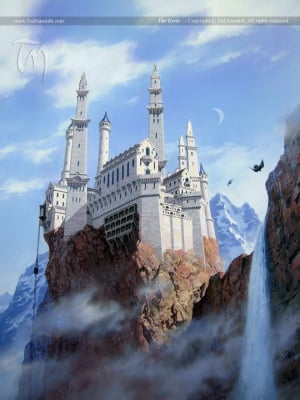 The sky cells in the lower levels of the Eyrie, by Ted Nasmith ©

The sky cells are located on the lower levels of the Eyrie.[2] Unlike in a normal dungeon, the sky cells only have three walls; the fourth side opens into thin air. The cells are small, with the empty side only five feet away from the opposing wall. The floor also slopes slightly, unnerving prisoners and making them fearful of accidentally falling to their death while sleeping.[1]

A prisoner poking out their head can see cells in other directions.[1] From a distance, the sky cells resemble a stone honeycomb.[1][2][3] Six hundred feet below is the waycastle Sky.[1]

It is cold in the sky cells with the wind screaming night and day. Many prisoners, driven mad by the cold and howling wind, commit suicide rather than remain imprisoned.[1][4]

Ser Arnold Arryn twice rose against his cousin Jeyne Arryn, Lady of the Eyrie. After his second rebellion failed, Arnold was driven mad while imprisoned in Jeyne's sky cells.[5][6]

When Tyrion Lannister is brought to the Eyrie by Catelyn Stark, Lady Lysa Arryn has Ser Vardis Egen imprison Tyrion in the sky cells. Tyrion is given a heap of soiled straw and a thin blanket for bedding. A previous tenant has written, in what looks suspiciously like blood, "Gods save me, the blue is calling." The gaoler Mord taunts his prisoner, dropping Tyrion's food into the air and kicking the dwarf. Tyrion is afraid he will slide to his death if he rolls over in his sleep.[1]

Tyrion sometimes has nightmares of his time in the sky cells.[9]

After he has been arrested, Marillion is tortured into falsely confessing that he killed Lysa Arryn. Lord Petyr Baelish, Lysa's actual killer, has Marillion repeat his confession in front of Lord Nestor Royce, and then returns the singer to the sky cells.[4] During his imprisonment, Marillion sings a variety of songs which echo throughout the castle.[4] Petyr later claims that Marillion has died.[10] 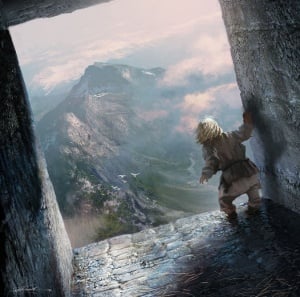 Tyrion Lannister in the Eyrie's sky cells, by Michael Komarck ©

He had plenty of fresh air and sunshine, and the moon and stars by night, but Tyrion would have traded it all in an instant for the dankest, gloomiest pit in the bowels of the Casterly Rock.[1]

The Arryns kept the only dungeon in the realm where the prisoners were welcome to escape at will.[1]

The sky cells always break them. The gods can see them there, and there is no darkness to hide in.[1]

Dungeon walls were thick enough to swallow songs and screams alike. But the sky cells had a wall of empty air, so every chord the dead man played flew free to echo off the stony shoulders of the Giant's Lance. And the songs he chose ... He sang of the Dance of the Dragons, of fair Jonquil and her fool, of Jenny of Oldstones and the Prince of Dragonflies. He sang of betrayals, and murders most foul, of hanged men and bloody vengeance. He sang of grief and sadness. No matter where she went in the castle, Sansa could not escape the music.[4]

The sky cells on the lower levels made the castle look something like a honeycomb from below. A honeycomb made of ice, Alayne thought, a castle made of snow.[2]