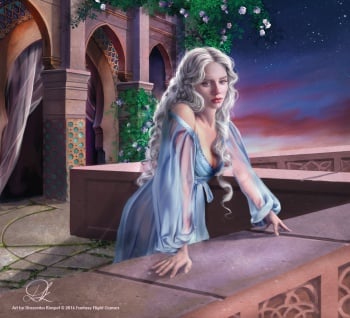 Who will show Dany the way?. © FFG

The way is a phrase that appears to be associated with Daenerys Targaryen. Some characters have offered to show her “the way”.[1][2]

In Braavos, once the dying Maester Aemon concludes that Daenerys is the prince that was promised he tells Samwell Tarly that he should be with her, showing her the way. [1] When Quaithe tells Danerys she is trying to show her the way, Daenerys assumes the way is part of the cryptic warning Quaithe gave her in Qarth.[3][2]

In Westeros the word “way” can refer to a route, such as Gorne's Way [4] or the Stone Way which is another name of the Boneway a major pass in Dorne and also the Wide Way, another name for the Prince's Pass.

Interestingly, in Westeros the words of House Hightower are: "We Light the Way" and according to semi-canon sources, House Yronwood motto is: “We Guard the Way”. 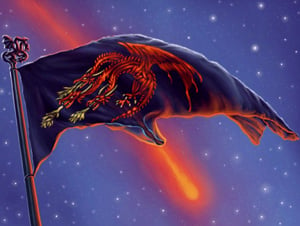 The wizard king tells Dany they sent the comet in order to show her the way. © FFG

Quaithe urges Daenerys to leave Qarth as soon as possible. When Dany asks for a clarification on this warning, Quaithe gives a cryptic answer:

To go north, you must journey south, to reach the west you must go east. To go forward you must go back and to touch the light you must pass beneath the shadow.[3]

In Braavos , after hearing of Dany and her dragons, a dying Maester Aemon despairs that he cannot show her the way, as he is too old and his body has betrayed him. [1]

In the Great Pyramid of Meereen, Daenerys has a vision of Quaithe. When Dany asks her what she wants of her Quaithe replies that she wants to show her the way. [2] Dany tells her that she remembers the way, reciting what the Quaithe told her in Qarth,

I remember the way. I go north to go south, east to go west, back to go forward. And to touch the light I have to pass beneath the shadow.[2]

When Daenerys is wandering lost, starving, and alone in the Dothraki Sea, she slips into a restless sleep and hears Quaithe's original instructions again.

We knew you were to come to us," the wizard king said. "A thousand years ago we knew, and have been waiting all this time, We sent the comet to show you the way."[5]

—the wizard king, to Daenerys Targaryen

The dragon must have three heads…but I am too old to be one of them. I should be with her, showing her the way, but my body has betrayed me.[1]