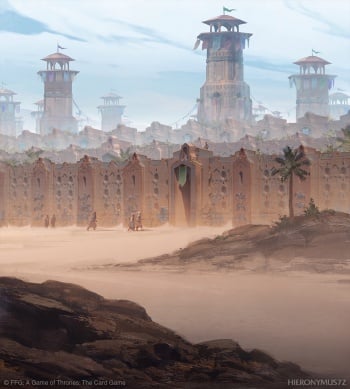 The triple walls of Qarth. © FFG

The triple walls of Qarth are three thick walls that surround the ancient port city of Qarth located on the southern coast of Essos. The walls are of thirty, forty, and fifty feet in height, respectively and are engraved with portraits of animals, war, and lovemaking.[1] The three walls of Qarth have not been used for defense in centuries, but they still stand, representing the power of the city.

The triple walls of Qarth is one of the nine wonders made by man reported in the book, Wonders Made by Man, by Lomas Longstrider[2]

The city's outer gates are banded with copper, the middle with iron and the innermost gates studded with golden eyes.[1]

As Yezzan zo Qaggaz lies dying, Penny suggests sailing to Qarth to Tyrion Lannister. She tells him of the city walls. However, Tyrion informs her that he has no intention of going any further east.[2]

The city walls are one of the wonders of the world.[2]