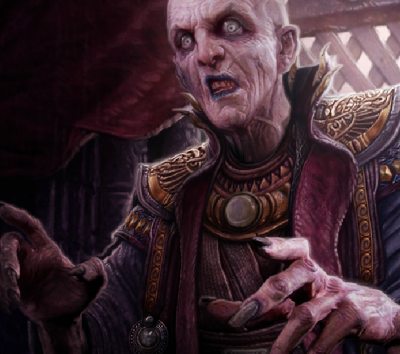 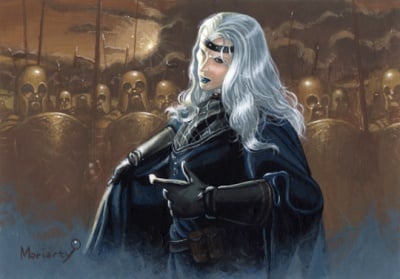 A warlock of Qarth by John Moriarty © Fantasy Flight Games

Warlocks are magic practitioners of Essos. Their center of power is the House of the Undying, home to the Undying Ones of Qarth.[1] Warlocks are also said to be active in Asshai, where all religious and magical disciplines can be practiced with impunity.[2][3]

The warlocks of Qarth are known to dress in long, beaded robes. They have white, pale skins and pale blue lips, from drinking shade-of-the-evening many times, in pursuit of ever-greater knowledge. The Undying Ones' flesh is ripe violet blue, their nails are so blue they are nearly black, and even the whites of their eyes are blue.[4]

Though legend speaks of the mighty power of the warlocks, they have done little in the past century. Similarly to the Alchemists' Guild of the Seven Kingdoms, the warlocks' power and prestige have waned over the years. Their mighty House of the Undying is long since a grey stone ruin, neither repaired nor expanded upon, often referred to as the Palace of Dust.[1][4] Even so, the warlocks are feared and respected throughout Essos[1] and few return from their ruin.[4]

The protagonist of A Caution for Young Girls allegedly served as the handmaid of a Qartheen warlock during part of her life.[5]

In an effort to cure Samwell Tarly of his timidity, his father, Lord Randyll Tarly, once brought to his castle at Horn Hill two warlocks from Qarth, with white skin and blue lips. The warlocks slaughtered a bull aurochs, and made Sam bathe in the hot blood, but it did not make him brave as promised. Randyll had the warlocks scourged.[6]

At the beginning of Daenerys Targaryen's stay in Qarth, Xaro Xhoan Daxos warns her to avoid the warlocks in the city.[1] Eventually, after having been refused by the Pureborn, Daenerys decides that she has no other options available to her other than to seek Pyat Pree and the warlocks.[8] Xaro warns her not to go, but she goes anyway. After Daenerys's visit to the House of the Undying and the subsequent death of the Undying Ones,[4] Xaro tells her that Pyat Pree is gathering the surviving warlocks together to work ill on her. As Daenerys is searching for a ship at the Port of Qarth, a Sorrowful Man attacks her with a manticore.[9]

In Winterfell, Maester Luwin tells Bran Stark that magic does not work, but Bran reminds him there are mages and warlocks in the east. Luwin corrects Bran, telling him that these are men who simply refer to themselves as mages and warlocks.[10]

On the Balerion, Daenerys thinks of various threats she faces. She recalls that back in Qarth, Pyat Pree had sent a Sorrowful Man after her to avenge the Undying she had burned in their House of Dust. She remembers it is said warlocks never forget a wrong.[11]

Pate recalls that Archmaester Marwyn had spent eight years in the east, and during that time, among other things, had studied with warlocks.[7]

Quellon Humble confides to Victarion Greyjoy that his brother, Euron Greyjoy, has three wizards aboard the Silence, queer terrible men, but Euron has made them his slaves. Victarion tells the dusky woman that Euron's wizards had seen that the Shield Islands would fall to him.[12]

Euron tells Victarion that he had captured four warlocks in a galleas out of Qarth. On board was a cask of shade-of-the-evening, along with some cloves and nutmeg and forty bolts of green silk. The warlocks told him a curious tale, which Euron does not elaborate upon. Euron killed a warlock who threatened him and fed him to the other three.[12] The surviving warlocks are reportedly coaching Euron in black magic.[12]

In Meereen, Daenerys learns from Xaro that she had not been gone a fortnight from Qarth when Pyat Pree set out from the city with three of his fellow warlocks to seek her in Pentos, in order to seek revenge on her for the burning of the House of the Undying.[13]

Inspired by Euron's captive warlocks, Victarion spares the life of Moqorro, a red priest, who is knowledgeable of Slaver's Bay and dragonkind.[14]

When Aeron Greyjoy is held captive by his brother Euron in the hold of the Silence, he notices mutilated warlocks. One of the captives cries a word, "Pree".[15]

Xaro: There is a saying in Qarth. A warlock's house is built of bones and lies.


Daenerys: Then why do men lower their voices when they speak of the warlocks of Qarth? All across the east, their power and wisdom are revered.


Xaro: Once they were mighty, but now they are as ludicrous as those feeble old soldiers who boast of their prowess long after strength and skill have left them. They read their crumbling scrolls, drink their shade-of-the-evening until their lips turn blue, and hint of dread powers, but they are hollow husks compared to those who went before.[1]
—Xaro Xhoan Daxos to Daenerys Targaryen

Pyat Pree has blue lips, and it is truly said that blue lips speak only lies. Heed the wisdom of one who loves you. Warlocks are bitter creatures who eat dust and drink of shadows. They will give you naught. They have naught to give.[8]

If a warlock's spell could kill me, I would be dead by now. I left their palace in ashes.[13]