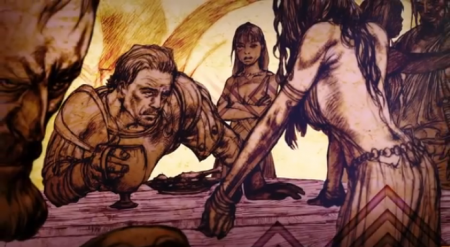 A pleasure house in Lys

Pleasure houses[1], pleasure gardens[2] or pillow houses[3] are different terms used throughout the known world to refer to brothels.

Lys is full of pleasure houses catering to every taste, no matter how peculiar.[4] One in particular is famed for its Naathi girls, who are clad in diaphanous silken gowns and adorned with gaily painted butterfly wings.[5]

Summer Islanders held the belief that no shame can be found in pillow houses.[6]

During the tilme of the Triarchy, Lysene captains took off women, girls, and comely young boys to serve in their pleasure gardens and pillow houses. One of these unfortunate women was the fifteen-year-old Johanna Swann, niece of the Lord of Stonehelm.[8]

The wealthy Rogare family owned a famous pleasure house, the Perfumed Garden, before their downfall in 135 AC.[9]

Doreah and Serra were both bought by Magister Illyrio Mopatis in Lysene pleasure houses.[10][3]

Obara Sand claims the whores in the pillow houses of Dorne mourn the death of Prince Oberyn Martell so much that they are working for free.[11]

The Yunkaii galley Willing Maiden contains twenty perfumed boys and eighty girls slaves to be trained in the pleasure houses of Lys when the Iron Fleet captures it.[12]