The citadel of Dragonstone is wrought all of black stone, its towers carved into the shapes of dragons. Art by Marc Simonetti

There is a prophecy that Azor Ahai will be reborn and will wake dragons out of stone.[3][4] According to Melisandre, only a king's blood can wake the stone dragon.[1] There are stone carvings of dragons at Dragonstone.[5][2] 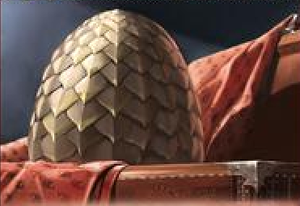 Daenerys Targaryen, born on Dragonstone,[6] is gifted three dragon eggs that are solid stone, fossilized over time.[7] Daenerys hatches them into living dragons in a miraculous ritual under the red comet at the funeral pyre of her husband, Khal Drogo.[8]

On Dragonstone, Melisandre tells Davos Seaworth of a prophecy that when the red star bleeds and the darkness gathers, Azor Ahai shall be born again amidst smoke and salt to wake dragons out of stone, that Dragonstone is the place of smoke and salt, and that Stannis Baratheon is Azor Ahai reborn.[3]

After the news of the Red Wedding, Melisandre beseeches Stannis to give her his nephew Edric Storm, a bastard son of the late King Robert I Baratheon, as a sacrifice so she can wake the stone dragon, but Stannis refuses.[2] Davos wonders if the carved dragons of Dragonstone were once real dragons, somehow turned to stone by the Valyrians.[2] Davos eventually smuggles Edric to safety aboard the Mad Prendos.[9]

At the Wall, Melisandre tells Jon Snow, Lord Commander of the Night's Watch, that Stannis is Azor Ahai reborn. Jon has heard all this from her before, and reminds her that Stannis was not born on Dragonstone, but at Storm's End.[4] 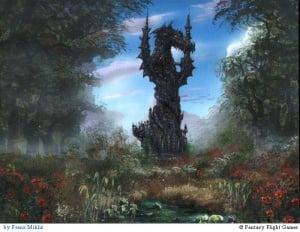 Shireen: I had bad dreams. About the dragons. They were coming to eat me.
Cressen: We have talked of this before. The dragons cannot come to life. They are carved of stone, child.[5]

Only a king's blood can wake the stone dragon.[1]

The Lord of Light cherishes the innocent. There is no sacrifice more precious. From his king's blood and his untainted fire, a dragon shall be born.[2]

Dragonstone had never seemed so dark and fearsome. He walked slowly, his footsteps echoing off black walls and dragons. Stone dragons who will never wake, I pray.[2]

If the red woman brings them to life, the castle will come crashing down, I am thinking. What kind of dragons are full of rooms and stairs and furniture? And windows. And chimneys. And privy shafts.[2]

I have seen it in the flames, read of it in ancient prophecy. When the red star bleeds and the darkness gathers, Azor Ahai shall be born again amidst smoke and salt to wake dragons out of stone.[4]