From A Wiki of Ice and Fire
(Redirected from The Shy Maid’s Dragonlore)
Jump to: navigation, search 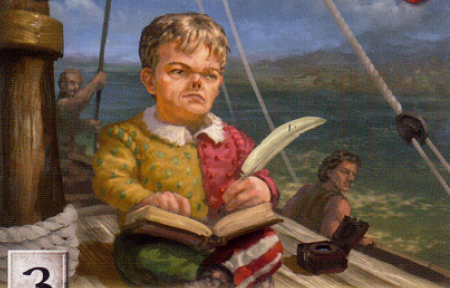 During Tyrion Lannister's journey down the river Rhoyne on the poleboat Shy Maid, Griff commands him to set down all that he knows of dragonlore.[1] Tyrion describes the task as formidable, but he labors at it every day, scratching away as best he can as he sits cross-legged on the boat's cabin roof.

Ten years ago Tyrion managed to get his hands on a fragment of Unnatural History by Septon Barth, but he doubts any of Barth's work found its way across the narrow sea. Tyrion thinks there is little chance of him finding Blood and Fire—sometimes called The Death of Dragons—since the only surviving copy is in the Citadel. What he really wants is the complete text of The Fires of the Freehold, Galendro's history of Valyria. Tyrion considers visiting a library within the Black Walls of Volantis to seek copies of the books he has in mind.[1]

Tyrion chooses not to rely on what he considers to be idle tales—which according to him make up the greater part of accounts on dragons—so a reader of his dragonlore will not have the added task of sifting through blatant untruths.[1] Tyrion thinks that Barth, Munkun, and Thomax hold markedly divergent views concerning the mating habits of dragons.[1]

Exactly how long Tyrion writes for and how much dragonlore is put to paper is unknown, as he is kidnapped by Ser Jorah Mormont in Selhorys[2] and taken to Volantis separately from Griff.[3]