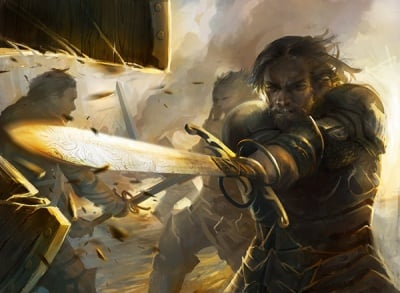 Heartsbane is the ancestral Valyrian steel sword of House Tarly. It is a two-handed greatsword. For the last five centuries, the sword has been a family heirloom passed down from one Lord of Horn Hill to the next.[1][2]

Savage Sam cut down dozens of Dornishmen with it during the Vulture Hunt.[3]

Lord Randyll wears it while with Renly Baratheon's army.[5]

Samwell has a dream featuring Heartsbane.[6]

When Lord Dunstan Drumm mentions Randyll and his famous sword will be part of the Reach army who will battle the Ironborn, Victarion Greyjoy gets excited at the idea of stealing the sword from Randyll, like Dunstan's ancestor did with Red Rain.[7]