Lomas Longstrider was a famous scribe[1] and traveler of Westerosi origin.[2] He is famously quoted as saying, "The gods made seven wonders and mortal man made nine".[1] 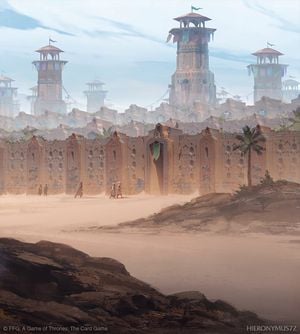 Lomas traveled the known world and wrote two famous books, Wonders and Wonders Made by Man, in which he cataloged sixteen sights he considered wonders.[1]

One of the wonders Lomas recorded are the Valyrian roads.[1] He also saw and described the triple walls of Qarth.[3] Lomas visited the colossal ruins of the Great Pyramid of Ghis.[4][5]

Lomas interviewed descendants of the Rhoynar living in the ruins of Chroyane.[6][7] He visited Norvos and named its three bells a wonder made by man. He also visited the large cavern system a hundred leagues northwest of Norvos, and listed it as one of the seven natural wonders.[8]

Lomas marveled at the Titan of Braavos[9] and named the Long Bridge of Volantis as one of the wonders made by man.[10] He also named the Palace With a Thousand Rooms in Sarnath among the man-made wonders.[5]

Lomas visited the Summer Isles, where he interviewed sages of the isles.[11]

Lomas passed east of the massive Bone Mountains but he did not do so by taking a ship in the Shivering Sea. Like many others, he either went through the mountain passes or by way of the Jade Gates.[2] It is said that at the sight of the Bones, Lomas lost heart, believing he had reached the ends of the earth.[12]

Lomas visited Yi Ti, where he was awestruck by its wealth and rich culture.[13] Lomas also apparently visited the successor cities of the Patrimony of Hyrkoon—Bayasabhad, Samyriana, and Kayakayanaya—as he said that there are no fiercer fighters in the world than their warrior women.[12][N 1]

Lomas claimed that Leng is an island of "ten thousand tigers and ten million monkeys".[14]

In his The World of Ice & Fire, Maester Yandel is contradictory as to whether or not Lomas visited Asshai. In his chapter on the westerlands, Yandel writes that merchants in Asshai asked Lomas about the famous gold of Casterly Rock.[15] In the book's section on Asshai and the Shadow Lands, however, Yandel writes that Lomas never reached the eastern city.[16]

Lomas Longstrider's writings are known to some educated Westerosi.[1][4] When Tyrion Lannister was a young boy, his uncle Gerion gifted him copies of Wonders and Wonders Made by Man. Gerion had his nephew recite all of the wonders during feasts to impress family and guests, and Tyrion kept rereading his copies until they fell apart.[1]

When Tyrion Lannister, Ser Rolly Duckfield, and Haldon Halfmaester speak of Lomas, Haldon reports the scribe to be long dead.[1]

In the continuity of Game of Thrones - A Telltale Games Series, Rodrik Forrester gives his sister Mira a copy of Wonders Made by Man as a gift.[17]

Tyrion: Lomas Longstrider told it true. The road's a wonder.


Haldon: A scribe, long dead. He spent his life traveling the world and writing about the lands he visited in two books he called Wonders and Wonders Made by Man.[1]
—Tyrion Lannister, Rolly Duckfield, and Haldon

For years afterward, he had cherished a dream that one day he would travel the world and see Longstrider's wonders for himself.[1]

Lomas Longstrider saw the walls of Qarth. His books suffice for me. I have gone as far east as I intend to go.[3]