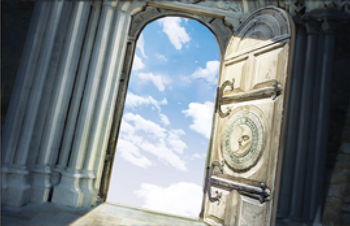 The Moon Door is a door at the Eyrie that leads to open air. Most executions at the castle use this door.[1]

The Moon Door is a narrow door that stands between two slender pillars in the High Hall of the Eyrie. It is made of weirwood and has a crescent moon carved into it.[1] Three heavy bronze bars hold in place the Moon Door, which opens inward. The door opens into thin air, with the waycastle Sky visible six hundred feet below on the side of the Giant's Lance.[2] The wind can be heard near the door even when it is closed.[3][4] 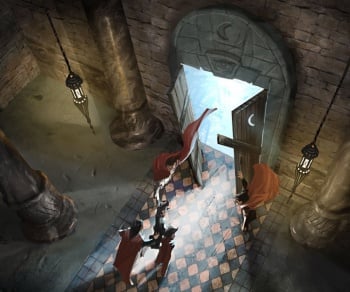 A condemned man being led to the Moon Door, by Thomas Denmark © Fantasy Flight Games

In 37 AC, at the start of the reign of King Aenys I Targaryen, Jonos Arryn rose in rebellion. He deposed and imprisoned his own brother, Lord Ronnel Arryn, and declared himself King of Mountain and Vale. Jonos executed Ronnel by send him flying out of the Moon Door.[5] When Prince Maegor Targaryen arrived at the Eyrie on his dragon, Balerion, the Eyrie's garrison seized Jonos and pushed him through the Moon Door to share his brother's fate.[6]

Young Lord Robert Arryn wants Tyrion Lannister, who has been accused by Lady Lysa Arryn of having murdered Lord Jon Arryn, to fly out the Moon Door. Lysa has the door opened to intimidate the prisoner. In response, Tyrion publicly demands trial by combat.[1]

Lord Petyr Baelish, Lysa's new husband, kisses her niece, Sansa Stark, in the Eyrie's garden; unbeknownst to them, the act is seen by Lysa. The Lady of the Eyrie later accuses Sansa of having tried to seduce Petyr, and she drags the girl to the Moon Door and has her open it. As Lysa threatens to force Sansa through the door, Petyr enters the High Hall and interrupts the fighting. Petyr promises never to leave his wife's side again, Lysa falls into his arms, and Sansa hugs a nearby pillar for safety. Petyr tells Lysa he has only ever loved one woman, her sister Catelyn, and then shoves Lysa out the Moon Door to her death. When guards arrive, Petyr blames Lysa's singer, Marillion.[2]

When Lord Nestor Royce, Ser Albar Royce, and Ser Marwyn Belmore come to the Eyrie to inquire about Lysa's death, Sansa—disguised as Petyr's bastard, "Alayne Stone"—repeats the lie that Marillion pushed Lysa to her death. Marwyn thinks Marillion should be pushed through the door as well, but Petyr has the singer returned to the sky cells.[3]

We keep no headsman in the Eyrie, my lord of Lannister. Open the Moon Door.[1]

How many men had the snot-nosed little wretch sent through that door already?[1]

Beyond was white sky, falling snow, and nothing else.[2]