This project is a part of westeros.org which provides the web space and technical support.

There are currently 8,842 articles.

Sister wikis in other languages

Links to articles that are available in other languages are on left side on the page.

All pages can be edited and you are welcome to join us and contribute to this wiki. 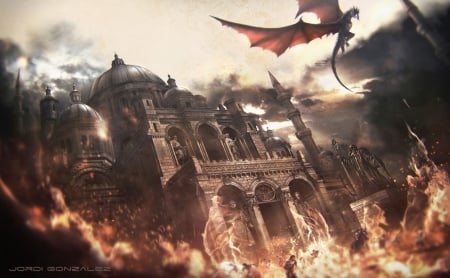 The Faith Militant uprising was a conflict between the Targaryen kings on the Iron Throne and the Faith of the Seven in the first century of the Targaryen Dynasty. Problems began during the reign of King Aenys I Targaryen, when the king's half-brother, Prince Maegor Targaryen, who had been married to Lady Ceryse Hightower, niece to the High Septon, since 25 AC, took a second wife in 39 AC. The Faith was angered by Maegor's polygamous marriage, and Aenys eventually exiled his half-brother when Maegor refused to set his second wife aside. In 41 AC, Aenys made matters worse when he wed his eldest daughter and son to one another. The High Septon denounced Aenys, and the smallfolk and pious lords turned against their king. Aenys eventually had to flee King's Landing with his family, after Poor Fellows scaled the walls of the Red Keep and attempted to murder the royal family. Aenys could not decide on how to proceed against the Faith, fell ill, and eventually died in 42 AC on Dragonstone.

With Aenys dead and the crown prince besieged at Crakehall, Dowager Queen Visenya Targaryen recalled her son Maegor from his exile. Maegor claimed the throne, went to King's Landing, and fought against Ser Damon Morrigen, captain of the Warrior's Sons, in a trial of seven. Although he was the only survivor of the trial, an injured Maegor fell into a coma for thirty days. Upon awakening, he mounted Balerion, flew to the Sept of Remembrance on Rhaenys's Hill, which had been fortified by the Warrior's Sons, and unleashed Balerion's flames upon the sept, consuming it (pictured). Maegor would spend the remainder of his reign fighting the Faith. Larges battles were fought at Stonebridge and the Great Fork of the Blackwater, bounties were set upon the Poor Fellows and Warrior's Sons, and a set of laws was created which forbade holy men from carrying arms (although this did not stop the war). Maegor went as far as to threaten to incinerate the Starry Sept at Oldtown, the center of the Faith, in response to the High Septon's condemnation of his polygamous marriages, but the High Septon's sudden and mysterious death saved the sept from destruction. Read more...