The prince that was promised

The Prince That Was Promised - by Marco Caradonna © FFG

The prince that was promised is a prophesied leader or savior. The prince may be part of an ancient prophecy which foretells the coming of a hero to deliver the world from darkness. A "bleeding star" is supposed to herald the coming of the prince.[1] The prince is said to have "a song", the song of ice and fire.[2] 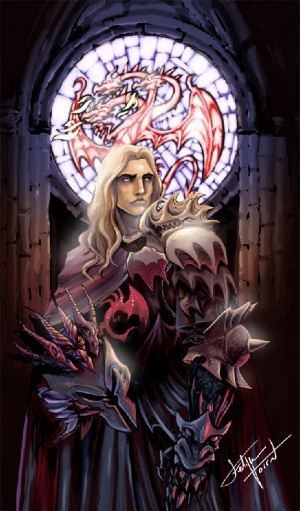 In his youth, Prince Rhaegar Targaryen thought he might be the prince that was promised - by Silvenger ©

Main article: the prince that was promised/Theories

It is not known from where the prophecy originates, as information on the prince that was promised is scant. According to Melisandre, a red priestess of R'hllor, the prince was prophesied five thousand years ago.[3] She has mentioned the prince that was promised[4] and Azor Ahai interchangeably but tends to use the name Azor Ahai far more often. Melisandre states that "When the red star bleeds and the darkness gathers, Azor Ahai shall be born again amidst smoke and salt."[5]

Maester Aemon mentions a bleeding star, along with smoke and salt, as being part of the heralding of the prince that was promised coming,[1] but he does not mention Azor Ahai. Archmaester Marwyn recalls that according to the prophecy, the prince would be "Born amidst salt and smoke, beneath a bleeding star."[6] When he was younger Aemon thought that Prince Rhaegar Targaryen was the prince who was promised, since the smoke would be from the fire at Summerhall and salt from the tears of those who cried there.[1]

Young Rhaegar agreed with Aemon that he might be the prince that was promised. According to Arstan Whitebeard, one day Rhaegar found something in his scrolls that changed him and he decided to become a knight, telling Ser Willem Darry, "I will require a sword and armor. It seems I must be a warrior."[7]

Rhaegar later believed that his infant son, Aegon, was the promised prince, since a comet was seen above King's Landing when the boy was born.[1] Rhaegar was killed by Lord Robert Baratheon in the Battle of the Trident,[8] however, and Aegon was killed by Ser Gregor Clegane in the Sack of King's Landing.[9]

When he was a boy, the future King Aegon V Targaryen recalled that King Aerys I once read about the return of dragons in a prophecy.[10] Maester Aemon believes that "the dragon must have three heads,"[1] although it is unknown if that is connected with the prince that was promised.

Daenerys Targaryen's eldest brother, the late Prince Rhaegar Targaryen, appears in one of her visions in the House of the Undying in Qarth. She sees him talking to his wife, Elia Martell, discussing what he shall name his son (Aegon) and his destiny. He states, "He is the prince that was promised, and his is the song of ice and fire."[2]

When at the port of Qarth with Ser Jorah Mormont, Daenerys mentions her brother said that the babe was the prince that was promised. Jorah observes that if Aegon was this prince that was promised, the promise was broken along with his skull when the Lannisters dashed his head against a wall during the Sack of King's Landing. Daenerys seems to accept this notion and asks about the song of ice and fire, but Jorah has never heard it.[11]

On Dragonstone Melisandre explains that Stannis Baratheon is the prince that was promised,[12] and that the red comet is his herald.[3]

At the Wall Melisandre commands the Night's Watch to light nightfires to protect against the dark and she speaks of the war for the dawn. When Maester Aemon asks about the prince that was promised, Melisandre states that Stannis is Azor Ahai.[13] 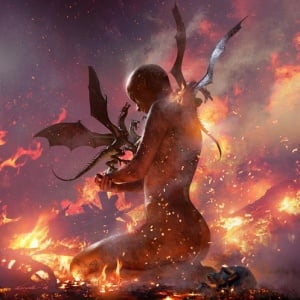 Daenerys the Unburnt by Michael Komarck ©

In Braavos, Samwell Tarly tells Aemon of the rumors about Daenerys and her dragons. The maester becomes convinced that Daenerys is the prophesied leader. Remembering Septon Barth's conclusion that dragons are of no mixed gender, Aemon determines there was an error in the prophecy's translation. He tells Sam that the hero is not a prince but a princess, Daenerys.[1]

Aemon intends to find Daenerys, but he dies en route to Oldtown, however.[1] Archmaester Marwyn announces his intention to travel to her at Slaver's Bay instead.[6]

In Meereen Ser Barristan Selmy talks to Daenerys about her mother, Rhaella, and father, King Aerys II. He mentions that her grandsire, King Jaehaerys II, commanded that they be wed after a woods witch had foretold that the prince who was promised would be born of their line. When Daenerys asks about the woods witch, Barristan mentions Summerhall and is then asked to leave by his weary queen.[14]

On the Wall a doubting Jon Snow reminds Melisandre that she has spoken of "a promised prince, born of smoke and salt", and that it seems to him that she makes nothing but mistakes.[15]

When Benerro preaches in Volantis that the dark eye has fallen upon Daenerys, Tyrion Lannister recalls an ancient prophecy of a hero who will save the world from darkness.[16]

Davos: A hill in a forest ... shapes in the snow ... I don't ...
Melisandre: It means that the battle is begun. The sand is running through the glass more quickly now, and man's hour on earth is almost done. We must act boldly, or all hope is lost. Westeros must unite beneath her one true king, the prince that was promised, Lord of Dragonstone and chosen of R'hllor.[12]

She talks of prophecies ... a hero reborn in the sea, living dragons hatched from dead stone ... she speaks of signs and swears they point to me. I never asked for this, no more than I asked to be king. Yet dare I disregard her?[4]

You are he who must stand against the Other. The one whose coming was prophesied five thousand years ago. The red comet was your herald. You are the prince that was promised, and if you fail the world fails with you.[3]

Melisandre: Swords alone cannot hold this darkness back. Only the light of the Lord can do that. Make no mistake, good sers and valiant brothers, the war we've come to fight is no petty squabble over lands and honors. Ours is a war for life itself, and should we fail the world dies with us.


Aemon: It is the war for the dawn you speak of, my lady. But where is the prince that was promised?


Melisandre: He stands before you, though you do not have the eyes to see. Stannis Baratheon is Azor Ahai come again, the warrior of fire. In him the prophecies are fulfilled. The red comet blazed across the sky to herald his coming, and he bears Lightbringer, the red sword of heroes.[13]
—Melisandre and Aemon

What fools we were, who thought ourselves so wise! The error crept in from the translation. Dragons are neither male nor female, Barth saw the truth of that, but now one and now the other, as changeable as flame. The language misled us all for a thousand years. Daenerys is the one, born amidst salt and smoke. The dragons prove it.[1]

Maester Aemon believed that Daenerys Targaryen was the fulfillment of a prophecy … her, not Stannis, nor Prince Rhaegar, nor the princeling whose head was dashed against the wall.[6]

Born amidst salt and smoke, beneath a bleeding star. I know the prophecy. Not that I would trust it.[6]

Prophecy is like a half-trained mule. It looks as though it might be useful, but the moment you trust in it, it kicks you in the head.[17]