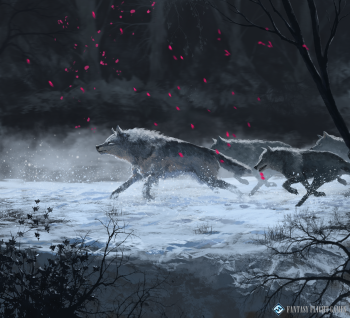 The Winter Wolves were northmen who supported the claim of Rhaenyra Targaryen at the beginning of the Dance of the Dragons. Led by Roderick Dustin, Lord of Barrowton, they fought for the blacks against the greens.[1]

Upon the outbreak of the Dance of the Dragons, Prince Jacaerys Velaryon flew on Vermax to White Harbor and Winterfell to ask the Manderlys and the Starks to support the blacks. Cregan Stark, Lord of Winterfell and Warden of the North, agreed upon the Pact of Ice and Fire with Jacaerys.[2] Northmen began gathering in support of the prince's mother, Queen Rhaenyra Targaryen, at White Harbor, Winterfell, and Barrowton.[3] Ser Medrick Manderly and his brother, Ser Torrhen, sailed with White Harbor knights to join Rhaenyra after the fall of King's Landing to her blacks.[1]

Meanwhile, Roderick Dustin, Lord of Barrowton, led two thousand grizzled greybeards south. Calling themselves the Winter Wolves, these warriors wore old mail and ragged skins, and they rode shaggy northern horses. The northmen wielded axes, mauls, spiked maces, and ancient iron swords.[1] It was long the custom in the north for older men to leave their homes in winter and thereby preserve supplies for their younger kin, so the Winter Wolves expected they would die while marching for glory, adventure, and plunder.[4]

Roddy the Ruin led the Winter Wolves to the Twins, where they met Lord Forrest Frey and his wife, Lady Sabitha Frey. Roderick marched with Forrest and Red Robb Rivers to the Gods Eye, where they joined with other rivermen to oppose a host of westermen commanded by Lord Humfrey Lefford. The Winter Wolves begged the honor of leading the attack in the ensuing Battle by the Lakeshore, charging five times at the Lannister spearmen. Two-thirds of the northmen were killed or wounded in the fighting, which was a decisive victory for the blacks.[1]

After Ser Criston Cole was killed south of the Gods Eye by Robb's longbowmen, Lord Dustin blew his warhorn to begin the charge of the Winter Wolves and their river knight allies against Criston's army in the ensuing Butcher's Ball, a slaughter of the greens.[1]

Screaming northern war cries, the surviving Winter Wolves rode from a postern gate in the First Battle of Tumbleton after most of Ser Garibald Grey's men reached the safety of the town. Although outnumbered ten to one, Roderick led the northmen to strike at Ormund Hightower, Lord of the Hightower. Roddy the Ruin managed to slay Ormund and his cousin, Ser Bryndon Hightower, before succumbing to his wounds. The blacks at Tumbleton were then betrayed by Ser Hugh Hammer and Ser Ulf White, however.[1]

Rhaenyra fled King's Landing after the Storming of the Dragonpit. While she was staying at Duskendale, Lord Stark wrote that he would gather for her a host of ten thousand northmen younger and fiercer than the fallen Winter Wolves.[5] Rhaenyra was killed at Dragonstone by King Aegon II Targaryen,[5] however, so Cregan's new army marched south in support of her son, Prince Aegon the Younger.[6]

We have come to die for the dragon queen.[1]

Criston: If there is to be battle here, many of your own will die as well.
Roderick: That's why we come. Winter's here. Time for us to go. No better way to die than sword in hand.[1]