The flight to Dragonstone designates the journey from King's Landing to the island of Dragonstone made by Queen Rhaenyra Targaryen and her small escort at the end of 130 AC during the Dance of the Dragons.[1]

In early 130 AC, Rhaenyra Targaryen led the blacks in taking King's Landing from the greens. As the inhabitants of the city did not bear love for King Aegon II Targaryen and his regent brother, Prince Aemond Targaryen, they welcomed the arrival of the queen. However, executions ordered by Rhaenyra and the increase in taxes implemented by her master of coin, Lord Bartimos Celtigar, made the new queen hated by the Kingslanders, to the point that the "Realm's Delight" became known in the streets as "King Maegor with teats".[1]

The greens' victory at the First Battle of Tumbleton worsened the situation for Rhaenyra, and King's Landing was terrorized by the advancing green army being so close. The death of Queen Helaena Targaryen, Aegon II's sister-wife who was taken captive by the blacks after the city's fall, triggered many riots throughout the city, which led to the Storming of the Dragonpit. The consequences were terrible for Rhaenyra: all dragons in King's Landing were massacred by the angry crowd, thousands of men were burned or crushed, the Hill of Rhaenys was in flames, and Prince Joffrey Velaryon, a son of Rhaenyra, died while trying to save his dragon, Tyraxes.[1]

Rhaenyra Targaryen's advisers agreed that King's Landing could no longer be held, and she was persuaded to flee with four of her ladies-in-waiting and her last living son,[N 1] Prince Aegon the Younger. The queen's fool, the dwarf Mushroom, remained behind. Rhaenyra's royal escort was composed of:

The party left the Red Keep at dawn the day following of the riots, slipping out of the city through the Dragon Gate, and rode along the coast towards Duskendale. The flight proved difficult: at Rosby the castle closed its gates when they approached, and at Stokeworth the castellan granted them hospitality only for one night. Half of the gold cloaks deserted, and Balon and Lyonel were killed during an outlaw attack. At Duskendale, Lady Meredyth Darklyn opened the gates of the Dun Fort on the condition that they would not stay long only after the intervention of Harrold, a kin to the Darklyns.[1][N 2]

With the help of Lady Darklyn's maester, Rhaenyra sent three ravens to Grand Maester Gerardys on Dragonstone asking for a ship to come and sail her home, but no ship came. Lord Cregan Stark and Lady Jeyne Arryn wrote of their support for Rhaenyra's cause, although it would take time for their distant armies to reach the queen.[1]

Once Lady Darklyn revoked her hospitality, Rhaenyra was forced to sell her crown to buy passage on a Braavosi merchant ship, the Violande. Harrold advised Rhaenyra to sail to Lady Arryn in the Vale, and the Manderly brothers offered to bring her to White Harbor. The queen refused them, however, sailing instead to her seat of Dragonstone, where she hoped to hatch a dragon egg. The remaining gold cloaks stayed in Duskendale.[1] 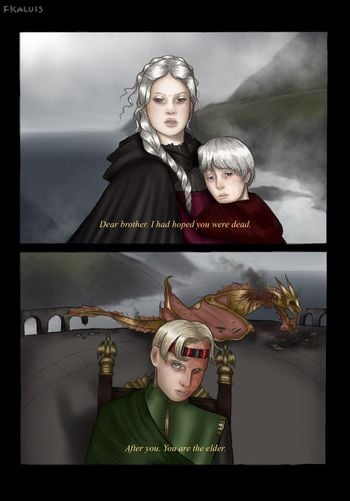 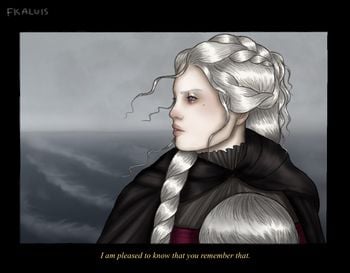 Rhaenyra arrived at Dragonstone on the twenty-second day of the tenth moon of 130 AC, with the Manderlys returning to the north aboard the Violande. Ser Alfred Broome and forty guards escorted the queen's diminished party from the harbor to the castle, where they found the corpses of Gerardys and Ser Robert Quince. The Queensguard were too slow to understand Alfred had betrayed Rhaenyra for Aegon II Targaryen, and the three knights were killed by Alfred's guards. After a quick and cordial exchange between the half-sister and the half-brother, Rhaenyra was forcefully separated from her son, and placed in front of Sunfyre, who burned her with dragonflame and then devoured her. Prince Aegon the Younger was forced to watch his mother die, and Elinda Massey supposedly gouged out her eyes at the sight. Rhaenyra's ladies and son were made prisoners of the greens.[1]

Rhaenyra Targaryen's flight from King's Landing left a power vacuum in the capital, and three "monarchs"—Trystane Truefyre, Gaemon Palehair, and the Shepherd—took control of parts of the city during the Moon of the Three Kings.[1] Lord Borros Baratheon eventually marched on the city in support of the greens.[2]

The death of Rhaenyra hurt the cause of the blacks, but King Aegon II Targaryen was forced to remain at Dragonstone since his return to King's Landing was blocked by the Velaryon fleet. The Dance of the Dragons continued, as the claim of the captive Prince Aegon the Younger was taken up by Lord Kermit Tully, Lord Cregan Stark, and Lady Jeyne Arryn.[2]

Rhaenyra: Dear brother. I had hoped you were dead.


Aegon: After you. You are the elder.
Rhaenyra: I am pleased to know that you remember that. It would seem we are your prisoners ... but do not think that you will hold us long. My leal lords will find me.