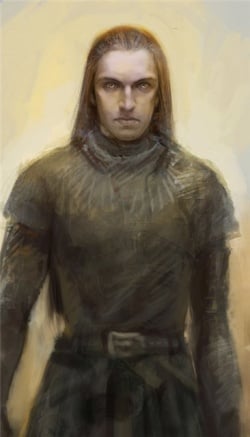 Domeric Bolton was a member of House Bolton, the sole trueborn son of Lord Roose Bolton and Lady Bethany Bolton, and heir to the Dreadfort.[2]

According to his father, Lord Roose Bolton, the quiet Domeric read history, played the harp, and was an excellent horseman.[3]

Domeric served four years as a page in Barrowton to his aunt,[2] Lady Barbrey Dustin, and then squired for three years for Lord Horton Redfort in the Vale of Arryn. Domeric enjoyed the company of Horton's sons and began to consider them brothers. Lord Redfort thought the lad had the making of a tourney champion.[3]

After returning from the Vale to the Dreadfort, Domeric heard he had a bastard half-brother, Ramsay Snow, and wished to seek him out, against his father's wishes, since he had always wanted a brother of his own. Soon after the visit, Domeric died in 297 AC[4] from a sickness of the bowels, according to Maester Uthor. However, Roose believes Ramsay poisoned Domeric, in order to become Roose's only son.[3] The heirless Roose subsequently brought Ramsay to live at the Dreadfort.[5]

Roose tells Theon Greyjoy about Domeric and his death while they ride through the streets of Barrowton.[3]

Domeric. A quiet boy, but most accomplished. He served four years as Lady Dustin's page, and three in the Vale as a squire to Lord Redfort. He played the high harp, read histories, and rode like the wind. Horses … the boy was mad for horses, Lady Dustin will tell you. Not even Lord Rickard's daughter could outrace him, and that one was half a horse herself. Redfort said he showed great promise in the lists. A great jouster must be a great horseman first.[3]

Ramsay killed him. A sickness of the bowels, Maester Uthor says, but I say poison. In the Vale, Domeric had enjoyed the company of Redfort's sons. He wanted a brother by his side, so he rode up the Weeping Water to seek my bastard out. I forbade it, but Domeric was a man grown and thought that he knew better than his father. Now his bones lie beneath the Dreadfort with the bones of his brothers, who died still in the cradle, and I am left with Ramsay. Tell me, my lord … if the kinslayer is accursed, what is a father to do when one son slays another?[3]

Once he had heard Skinner say that the Bastard had killed his trueborn brother, but he had never dared to believe it. He could be wrong. Brothers die sometimes, it does not mean that they were killed.[3]