Mikken is the blacksmith at Winterfell.[1] In the television adaptation Game of Thrones he is portrayed by Boyd Rankin. 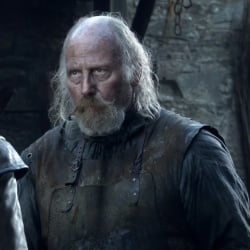 Boyd Rankin as Mikken in the HBO adaptation

In order for Bran Stark to get around his room, Mikken installs metal bars along the walls so Bran can pull himself around.[3] Jojen Reed foresees the death of Mikken in his green dreams, but Mikken laughs it off when Bran tells him.[4] When Theon Greyjoy captures Winterfell, Mikken angrily refuses to bend the knee and is slain by Stygg, an ironborn raider in Theon's service.[5]