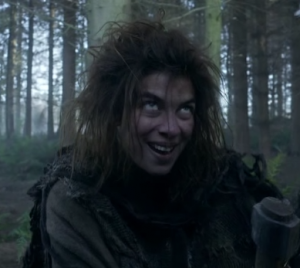 Natalia Tena as Osha in Game of Thrones

Osha is a free folk woman who becomes a captive of Winterfell and later a servant of House Stark. In the television adaptation Game of Thrones she is played by Natalia Tena.[1]

Osha is tall and lean, standing a head taller than Robb Stark. She has a hard face, shaggy brown hair,[2] and is flat-chested.[3] Her body bears many scars.[3]

Osha is a spearwife from north of the Wall. Bran Stark compares her long spear to a steel-headed serpent.[2] She is described as tough and uncomplaining.[4] She worships the old gods of the forest and is knowledgeable about them, as well as the lands beyond the Wall and their inhabitants. She also has a brother, who at some point killed a ten-foot tall female giant.[5]

Osha travels with three other wildlings and a pair of Night's Watch deserters, Stiv and Wallen. This group flees south of the Wall, trying to escape the Others. They cross the Wall and travel into the wolfswood north of Winterfell, where they come upon the crippled Bran Stark. Osha wants to take him hostage and return to Mance Rayder, presumably to use him to gain passage south through the Wall. Robb Stark, Theon Greyjoy, Grey Wind, and Summer arrive to rescue him and all of the band are killed, except Osha. She is taken back to Winterfell for questioning.[2] She is eventually given a limited freedom of the castle for her good behavior and employed as a kitchen servant. [5]

Osha goes to pray to the old gods in the godswood and comes upon Bran as he finishes his prayers. She is wearing chains on her legs. The two bond to a degree, sharing a common devotion to the old gods. She tells him that when the weirwood leaves are rustling in the wind, it means the old gods are listening. She also says that the old gods have no power in the south because the weirwoods are gone. She says that Robb is marching the wrong way, and that she has been trying to warn him that the Others are coming, but was ignored.[5]

Bran dreams that he saw his father, Lord Eddard Stark, in the crypt of Winterfell. Maester Luwin summons Osha to carry Bran and goes down to the crypts with him; Osha tells them that she has lived her life beyond the Wall and a hole in the ground will not scare her. Because of Osha’s good behavior, the chains from her shackles are removed, but the shackles remain to show she is not totally trusted. They are surprised in the catacombs by Shaggydog, who savages Maester Luwin's arm. They return to Luwin's tower, where Osha bandages the maester's wound.[4]

Osha works in the kitchens, often giving Bran advice when she bathes in the godswood. During one of their conversations, Osha reveals to Bran that she had killed a Night's Watch ranger in the past.[3]

After Winterfell is taken by the turncloak Theon Greyjoy and his ironborn, Osha publicly bends the knee to Theon and is set free.[6] However, Osha secretly helps Bran and his companions escape and hide, killing Drennan in the process.[7]

After the sack of Winterfell, Osha helps Bran and Rickon escape, along with their direwolves, the Reed siblings, and Hodor. The group splits up outside Winterfell. Bran, Summer, the Reeds, and Hodor head north while Osha escorts Rickon and Shaggydog to parts unknown. Before they leave, Osha grants a mortally wounded Maester Luwin the gift of mercy.[8]

It has been revealed by a survivor of the sack of Winterfell, Wex Pyke, that Osha has taken Rickon and Shaggydog to Skagos.[9]

You tell him this, m’lord. You tell him he’s bound on marching the wrong way. It’s north he should be taking his swords. North, not south.[5]

Who do you think sends the wind, if not the gods?[5]

The giants I’ve seen, the children I’ve heard tell of, and the white walkers ...[10]