Obara Sand is the bastard daughter of Oberyn Martell and an Oldtown whore. She is the eldest of the infamous Sand Snakes. In the television adaptation Game of Thrones she is portrayed by Keisha Castle-Hughes.

Obara is a big-boned woman near to thirty, long-legged, with close-set eyes and with the same rat-brown hair of her mother[3] which she sometimes ties in a knot.[4] She strides quickly and angrily.[3][4] Obara has callused hands and can have a mannish look.[4]

A prickly, hot-tempered woman,[5] Obara is given to martial pursuits as she considers herself a warrior. She wears a mottled sandsilk cloak of dun and gold over brown riding leathers and wields a spear, a whip, and a round shield of steel and copper.[3] Instead of a gown, fierce Obara prefers men's breeches, a calf-length linen tunic, and a belt of copper suns.[4]

Obara is a confident rider who uses spurs, often to the point where the animal is bloody, and she always rides stallions.[3] Obara is also fond of wine.[5]

Obara chose her father, Oberyn Martell, over her mother, a prostitute, when Oberyn came to Oldtown to claim her. Obara's mother drank herself to death within a year.[3]

Obara spent part of her youth at the Water Gardens.[3] 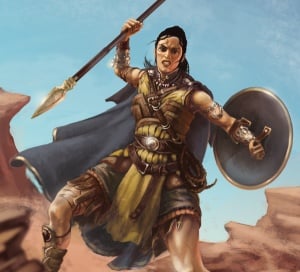 Obara meets Doran Martell, Prince of Dorne, at the Water Gardens, demanding vengeance for her father, Oberyn Martell, who was slain by Ser Gregor Clegane in King's Landing. Obara wants to slay Gregor's liege, Lord Tywin Lannister, and burn Oldtown. Doran says he will think about it. After more visits by her half-sisters, Doran orders the arrest of all the Sand Snakes.[3] The elder sisters are detained in the Spear Tower in Sunspear.[4]

Obara and her sisters are released from the Spear Tower and are present at the feast when Ser Balon Swann presents the Mountain's skull to Doran. She places Gregor's skull on top of a marble column because Maester Caleotte cannot reach it.[4] When a toast is raised by Ricasso to King Tommen I Baratheon, Obara allows her wine cup to be filled before upending it onto the floor and leaving.[4]

When discussing Gregor's death with her sisters, Areo Hotah, Arianne Martell, Ellaria Sand, and Prince Doran, Obara vouches for war against House Lannister, causing Ellaria alarm.[4] Doran has Obara lead Balon to High Hermitage so he can hunt and kill Ser Gerold Dayne for his attack on Princess Myrcella.[4] 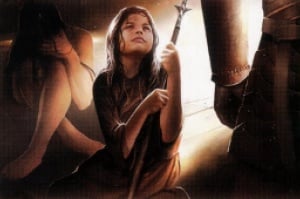 The day my father came to claim me, my mother did not wish for me to go. 'She is a girl,' she said, 'and I do not think that she is yours. I had a thousand other men.' He tossed his spear at my feet and gave my mother the back of his hand across the face, so she began to weep. 'Girl or boy, we fight our battles,' he said, 'but the gods let us choose our weapons.' He pointed to the spear, then to my mother's tears, and I picked up the spear. 'I told you she was mine,' my father said, and took me. My mother drank herself to death within the year. They say that she was weeping as she died.[3]

Give me back my spear, Uncle. Cersei sent us a head. We should send her back a bag of them.[4]

Obara Sand always walked too fast. She is chasing after something she can never catch, the prince had told his daughter once, in the captain's hearing.[7]

Quick and strong as she was, the woman was no match for him, he knew ... but she did not, and he had no wish to see her blood upon the pale pink marble.[3]