The Grey King is so named because his hair, beard, and eyes were grey as the winter sea, and at the end of his life even his skin had turned grey.[3] He supposedly wore robes of woven seaweed and a tall pale crown made from Nagga's teeth,[1] but he is alternatively said to have worn a driftwood crown.[3] 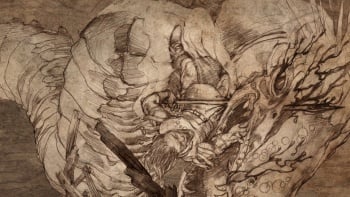 Legends say the Grey King slew the sea dragon Nagga, after which the Drowned God turned the sea dragon's bones to stone. From the bones was made the Grey King's Hall, which he heated with Nagga's living fire.[4] He took a mermaid[2] as his wife so his children could live on land or in water. He also wore a crown of driftwood so all who knelt before him would know his power came from the sea and the Drowned God himself.[3]

The Grey King brought fire to the earth by taunting the Storm God into setting a tree on fire with a thunderbolt. He taught men to weave nets and sails. The Grey King allegedly carved the first longship from the pale wood of Ygg, a demon tree which fed on human flesh.[3] [4]

The Grey King's skin turned as grey as his hair and beard as he ruled over centuries. Eventually he cast aside his driftwood crown and walked into the sea to descend to the watery halls of the Drowned God to take his place at the right hand of the god.[3] The Storm God snuffed out Nagga's fire after the Grey King's death and the sea stole his throne, with Nagga's bones the only remnants of the Grey King's Hall.[1]

The Grey King is said to have had a hundred sons who fought after his death. The sixteen who survived divided the Iron Islands amongst themselves.[3]

Urras Greyiron was chosen in a kingsmoot as the first High King of the Iron Islands since the Grey King.[3]

Vickon Greyjoy, a descendent of the Grey King, was chosen as the new Lord of the Iron Islands after Aegon's Conquest.[5]