House Orkwood of Orkmont is a noble house from the Iron Islands, with its seat on the island of Orkmont.

They blazon their arms as dark green pines strewn closely together on yellow.[2][3]

King Rognar II Greyiron was brought down by an alliance which included the Orkwoods.[4] 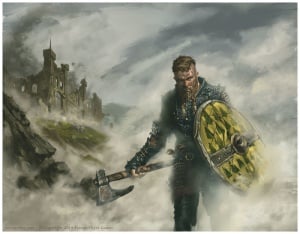 House Orkwood at the end of the third century

The known Orkwoods during the timespan of the events described in A Song of Ice and Fire are: