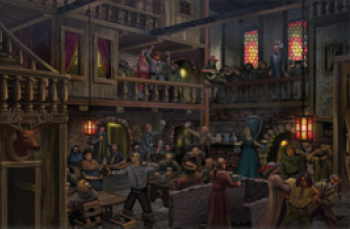 The interior of the Merchant's House. © FFG

The Merchant's House is the finest and largest inn in Volantis. It is located on Fishmonger's Square. It is a four story monstrosity that squats amongst the warehouses, brothels, and taverns of the waterside like some enormous fat man surrounded by children.[1]

The Merchant's House is the first choice for shippers, captains, and merchantmen.[1] Traders from Oldtown and King's Landing mingle with their counterparts from Braavos and Pentos and Myr, with hairy Ibbenese, pale skinned voyagers from Qarth, coal-black Summer Islanders in feathered cloaks, even masked shadowbinders from Asshai by the Shadow.[2]

It is also the headquarters of the widow of the waterfront.

The Merchant's House is famous for its locks, which are as secure as a gaol.[1]

The common room is a cavernous warren, larger than the great halls of half the castles in Westeros. It is a dim lit maze of a place with a hundred private alcoves and hidden nooks whose blackened beams and cracked ceiling’s echo in the din the sailors, traders, captains, money changers, shippers, and slavers, lying cursing, and cheating each other in half a hundred different tongues.[1]

A lot of business is done in the common room. There is a central courtyard where a trellis of flowering vines throws intricate patterns across the flagstone floor and green and purple moss grows between the stones. The widow of the waterfront has a customary table in the common room in the corner by the courtyard where she is steeped in shadow so that she herself is nigh invisible.[1]

There are cheap rooms on the fourth floor, with iron rings set in the walls for chaining up slaves. One of the rooms, edged into a corner of the building beneath a sloping roof, is the bedchamber Ser Jorah Mormont uses, featuring a low ceiling, a sagging feather bed with an unpleasant odor, and a slanting wood-plank floor that reminds Tyrion Lannister of his sojourn at the Eyrie.[1]

The room's two windows are it's chief amenity. One window looks toward the Long Bridge and the black-walled heart of Old Volantis across the river. The other opens on the square, called Fishmonger's Square, below.[1] 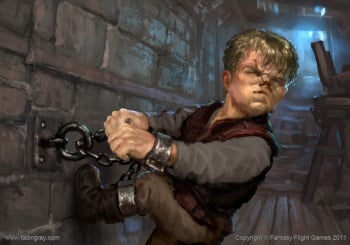 Quentyn Martell and his companions stay at the Merchant's House when in Volantis.[2]

Prior to leaving for Yunkai, four Windblown serjeants set up a trestle table outside of the Merchant's House calling to every passing man and boy, looking for fresh meat to fill their ranks. Their presence hatches Greenguts's plan for himself and his companions to join the Windblown as a means to get to Meereen and thereby Daenerys Targaryen.[2]

Much later, Ser Jorah Mormont takes his hostage, Tyrion Lannister, to the Merchant's House. He chains Tyrion to the wall in a room on the fourth floor and later takes Tyrion with him when he meets with the widow of the waterfront, from whom he is seeking assistance in finding a ship to take himself and Tyrion to Meereen to meet Daenerys Targaryen. She's reluctant to aid them due to Jorah's secretive attitude but ultimately offers them the information they need after Penny attacks Tyrion.[1]