Ser Gerris Drinkwater is a knight from House Drinkwater and a long-time friend of Prince Quentyn Martell.[3] Gerris is sworn to House Yronwood.[4]

Gerris is tall and lean and comely, with blue-green eyes and sandy, sun-streaked hair.[3][5][6] He has a swordsman's grace and a courtier's wit.[6] His confidence is often close to arrogance.[3] Gerris does not speak the Volantene dialect of High Valyrian as well as Quentyn Martell.[3]

Gerris once led Quentyn Martell and some other friends into the Red Mountains to find the lair of the Vulture King.[3] Quentyn's first kiss was with one of Gerris's twin sisters.[3] 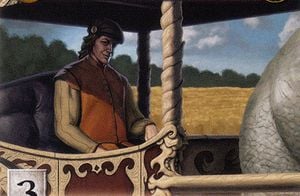 Ser Gerris accompanies Prince Quentyn Martell on his mission to wed Daenerys Targaryen. They are forced to fend off corsairs when the Meadowlark is attacked near the Disputed Lands.[3]

When they reach Volantis, Gerris pretends to be a wine merchant looking for a ship to take him and his two servants to Meereen, where Daenerys has become queen. The only captain to accept them is the master of Adventure, but the Dornishmen fear he will betray them.[3] Posing as poor exiles, they instead join the Windblown, who have been hired by Yunkai for the second siege of Meereen.[1] Having sold their fine armor in Volantis, the Dornish receive used equipment from the Windblown, with Gerris's inferior to that of his companions, Quentyn and Ser Archibald Yronwood. Among the sellswords Gerris is known as Dornish Gerrold or Drink, after Archibald accidentally calls him that.[1]

The Windblown sail from Volantis and fight new Unsullied in the siege of Astapor.[1] The three Westerosi plan to desert after they reach Yunkai, but the Tattered Prince, the commander of the Windblown, summons them with other exiles from the Seven Kingdoms or sellswords of Westerosi descent. The Tattered Prince tasks the group of twenty with turning their cloak from Yunkai and joining the service of Daenerys. With this move the Tattered Prince wants to make sure that if the siege turns unfortunate he will be still on the winning side.[1]

Once the Dornishmen reach Meereen[8] and present themselves to Daenerys, Gerris is the first one to say his real name. He becomes angry when Daario Naharis mocks Quentyn, and the knight unsuccessfully tries to convince Daenerys not to wed Hizdahr zo Loraq.[5] The Dornishmen attend Hizdahr's feast but are seated far from the king. Quentyn refuses Daenerys's suggestion that he leave Meereen.[9]

After Daenerys flees from Daznak's Pit atop Drogon,[10] Ser Barristan Selmy considers that his queen may not have wed Hizdahr if Gerris had been the Dornish prince instead of the less handsome Quentyn. Barristan advises the three Dornishmen to return to Westeros and forget about the secret marriage pact, but Gerris, who is unafraid of Hizdahr, turns down the advice of the old knight.[6]

Quentyn hopes that since he has partial House Targaryen ancestry, he will be able to tame at least one of Daenerys's dragons, two of which are imprisoned in the Great Pyramid. Although Gerris tries to dissuade the prince, Quentyn is determined. In return for Pentos, the Tattered Prince agrees to have the Windblown aid Quentyn.[11]

Gerris saves Quentyn from a guard's spear when the Dornishmen and Windblown infiltrate the Great Pyramid. When Quentyn attempts to tame Viserion, Gerris and Archibald try to warn him of the other dragon, Rhaegal, whose flame burns the prince.[12] The Windblown flee, but Gerris and Archibald are arrested by Brazen Beasts. Gerris is so shocked by what happened with his prince that he drops his sword the moment the guards appear. Quentyn succumbs to his wounds after three days.[7]

Since Rhaegal and Viserion have been set loose, Symon Stripeback and Skahaz mo Kandaq want Gerris and Archibald to be hanged while the Spotted Cat wants to slay them in the fighting pits of Meereen.[7] When Barristan comes to see the Dornish prisoners, Gerris blames Daenerys for what had happened with Quentyn, saying that her actions forced the prince to risk his life in order to win her. Barristan tells them that they are to be hanged but he could instead arrange a ship for them to take Quentyn's bones to Dorne. In return, the Hand of the Queen wants the Dornishmen to inform the Tattered Prince that Barristan will pay his price of Pentos if the hostages in the Yunkish camp are returned to Meereen. Although Gerris is skeptical, Archibald accepts for both of them.[7] 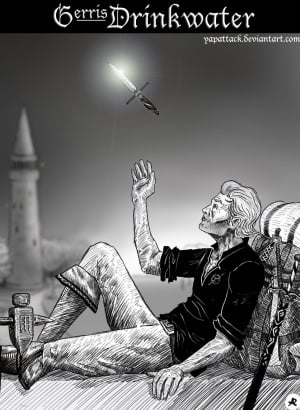 Men's lives have meaning, not their deaths.[11]

Men may be found of maidens, but women like a man who knows what he's about in the bedchamber. It's another sort of sword-play. Takes training to be good at it.[12]

I told him it was folly. I begged him to go home. Your bitch of a queen had no use for him, any man could see that. He crossed the world to offer her his love and fealty, and she laughed in his face.[7]

It was not in Gerris Drinkwater's nature to imagine they might fail, let alone that they might die.[3]

That smile has won many a maiden's heart, I'll wager.[5]

If this one had been the prince, things might have gone elsewise, he could not help but think ... but there was something a bit too pleasant about Drinkwater for his taste. False coin, the old knight thought. He had known such men before.[6]