"The Night Lands" is the second episode of the second season of HBO medieval fantasy television series Game of Thrones, written by the show creators and executive producers David Benioff and D. B. Weiss, and directed by Alan Taylor. The episode was first released on April 2, 2012 via HBO's online service (HBO GO), available only for customers of certain European countries such as The Netherlands, Poland or Slovenia. The first airing through cable television took place on April 8 2012.

The plot continues with some of the storylines from the season premiere: the Night's Watch caravan heading to the Wall is interrupted by a pair of City Watch guards looking for Gendry, the Small Council receives the terms proposed by King in the North Robb Stark, Daenerys Targaryen waits in the desert for the return of the three riders she had sent forth, and Theon Greyjoy finally returns to his homeland of the Iron Islands.

The episode is titled The Night Lands after the term used in Dothraki to refer to death.

Tyrion Lannister (Peter Dinklage) arrives at his quarters to find Shae (Sibel Kekilli) and Lord Varys (Conleth Hill) conversing. Tyrion and Varys trade threats before they both leave for a small council meeting, where Queen Regent Cersei Lannister (Lena Headey) reads Robb Stark's peace terms, and a letter from the Night's Watch Lord Commander Jeor Mormont, asking for more men to man the Wall. Later, Tyrion has a tense dinner with Lord Janos Slynt (Dominic Carter), which ends with Slynt's removal as commander of the City Watch and being forced to take the black, and Bronn's (Jerome Flynn) installation in the now vacant position. Cersei later confronts Tyrion about Slynt, and says that it was King Joffrey Baratheon (Jack Gleeson) who ordered the murder of Robert Baratheon's bastard children.

Davos Seaworth (Liam Cunningham) and his son, Matthos (Kerr Logan), attempt to bargain with the pirate Salladhor Saan (Lucian Msamati) for the use of his ships in the coming war. Later, Davos tells Stannis (Stephen Dillane) and Melisandre (Carice van Houten) of Saan's willingness to aid their army with his 30 ships. Stannis orders Davos and Matthos from the room, when Melisandre promises him a son if he will give himself completely to the Lord of Light.

At the Iron Islands

Theon Greyjoy (Alfie Allen) returns to his homeland, but is not impressed by the greeting he receives. Shortly after, he is greeted by a young woman, who, unbeknownst to him at the time, is his sister, Yara (Gemma Whelan). They share a horse ride to Pyke, the capital of the Iron Islands, where Theon receives a cold welcome from his father, Balon (Patrick Malahide). Theon presents him with the offer from Robb Stark, but Balon refuses it.

One of Daenerys Targaryen's (Emilia Clarke) bloodriders' horses return to camp, carrying his head in one of its saddlebags. Ser Jorah Mormont (Iain Glen) tells her it is a warning from one of the other khals.

Samwell Tarly (John Bradley) helps Gilly (Hannah Murray) when she is confronted by Ghost. She and Sam confront Jon Snow (Kit Harington) about taking her with them when they leave Craster's land. Later, Jon witnesses Craster taking a newborn child into the woods late at night. He follows Craster into the woods, only to see him returning, empty-handed. When he rushes to the aid of the child, he sees a white walker retrieve the baby, and leave. Before Jon can pursue it, Craster hits him in the head and he loses consciousness.

At the Caravan bound for the Wall

Two City Watchmen arrive at the caravan with a royal warrant, searching for Gendry (Joe Dempsie). However, they are turned away by Yoren (Francis Magee), after he threatens their lives. Later, Gendry reveals to Arya Stark that he knows she is a girl, after a conversation about why the City Watch would be hunting him. She also reveals to him that she is a Stark.

The episode was written by David Benioff and D. B. Weiss, based on original material from George R. R. Martin's second book of the series,A Clash of Kings. It includes most of the plot from chapters Arya II, Tyrion II, Arya III, Theon I, Tyrion III, part of Tyrion V, and part of Theon II. (chapters 5, 8, 9, 11, 12, 15, 20 and 24 respectively).

Theon Greyjoy's family is cast in this episode. The role of his father Balon Greyjoy, Lord of the Iron Islands, went to the English actor Patrick Malahide. The character of his sister was renamed from the original books (from Asha to Yara) in order to avoid confusion with the already established character Osha (the wildling captive at Winterfell), and Gemma Whelan was chosen to play it.[1] After seeing Gemma and Alfie Allen (Theon Greyjoy) acting together, the show creators assured that they made "an insanely good pair of siblings".[2]

Also introduced in this episode are the three caged recruits traveling with the Night's Watch caravan. The three characters were briefly seen in the last season's finale, played by uncredited extras. For this season they were cast by Andy Beckwith as Rorge, Gerard Jordan as Biter, and the German actor Tom Wlaschiha as the mysterious Jaqen H'ghar of the free city of Lorath. Wlaschiha had not heard about the show before auditioning for the part on tape from Berlin, but when he was able to screen a few episodes in a few spare hours during a meeting with the producers and director Alan Taylor, became an enthusiast and even read the first books of the series in a couple of days.'[3]

Finally, the part of the Lyseni pirate Salladhor Saan went to Lucian Msamati. Msamati's physical appearance, a British black actor of Tanzanian descent, contrasts with Sallahdor's portrayal in the books, where he is described with the typical fair-haired and skinned look of the free city of Lys.[4] 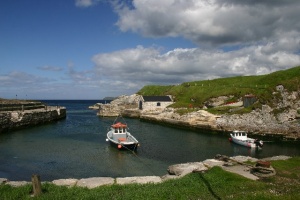 The harbour of Ballintoy was redressed as the port of Pyke.

The episode introduces the new location of Pyke, the Greyjoy's seat of power at the Iron Islands. The location used was the Lordsport Harbour at Ballintoy, in the North Irish county of Antrim.[5] The filming at the Harbour took place on August 18, 19 and 22, 2011, and from August 15 there was a limited public access to the zone. The local shops and the fishermen, who had to temporarily berth their boats at the nearly town of Ballycastle, were compensated by the production.[6]

The opening credits introduce yet another location with the inclusion of Pyke. Also, Nikolaj Coster-Waldau (Jaime), Michelle Fairley (Catelyn), Isaac Hempstead-Wright (Bran), Richard Madden (Robb), Sophie Turner (Sansa), Jack Gleeson (Joffrey) and Rory McCann (Sandor), are not credited as they do not appear in the episode.

This page uses content from the English Wikipedia. The original content was at The Night Lands. The list of authors can be seen in the page history of The Night Lands. As with A Wiki of Ice and Fire, the content of Wikipedia is available under the Creative Commons Attribution-ShareAlike License.