A Man Without Honor (TV)

"A Man Without Honor" is the name of the seventh episode of the second season of the HBO medieval fantasy television series Game of Thrones. It was written by David Benioff & D.B. Weiss and directed by David Nutter. It aired on May 13, 2012.

The name of the episode comes from Catelyn Stark's assesment of Ser Jaime Lannister: "You are a man without honor," after he kills a member of his own family in order to attempt escape.

Sansa Stark (Sophie Turner) thanks the Hound Sandor Clegane (Rory McCann) for saving her during the riots, but her thanks is met with a cold reception. Later, Sansa is awakened by a nightmare of the riots, and discovers that she has bled, which means she will soon have to bear Joffrey's children. When Shae (Sibel Kekilli) discovers her trying to cut the blood from her sheets, she begins to aid her, but they are discovered by one of the Queen's handmaidens, who rushes to tell the Queen. Shae catches her in the hall and threatens her life should she tell anyone, but upon her return discovers the Hound now knows as well. Cersei Lannister (Lena Headey) meets with Sansa to discuss her duty to Joffrey Baratheon, but tells her that it will be impossible to love Joffrey so she should just focus on loving her children. Tyrion Lannister (Peter Dinklage) discusses with Cersei that Stannis' fleet will be arriving in days and the King's plan to repel them might not work. Cersei opens up and admits to Tyrion that Jaime is the father of her children and regrets making Joffrey King who has become mad with power, believing she is being punished for committing incest. Tyrion can do nothing but counsel his sister that her other two children are still fine.

Jon Snow (Kit Harington) continues to search for his companions with his prisoner, Ygritte (Rose Leslie), in tow. When Ygritte deduces that Jon has never been with a woman, and learns that he has taken a vow of celibacy, she is dumbfounded, and tries to convince him that life would be better with the wildlings, under Mance Rayder. Jon remains true to his vows, and rebuffs her repeatedly. While crossing a muddy passage, Ygritte is able to slip away from Jon and make her escape. Jon pursues her but is unable to find her until she whistles to him, at which point several wildlings reveal themselves, thus capturing Jon.

Lord Tywin Lannister (Charles Dance) orders Ser Gregor Clegane (Ian Whyte) to find Amory Lorch's killer, having confused the murder of Lorch with an attempt on his own life. When Clegane leaves, he invites Arya Stark (Maisie Williams) to eat with him, which she eventually does. They discuss Tywin's desire to leave a legacy and the conquest of Westeros by Aegon the Conqueror, which lead to the destruction of Harrenhal. Tywin is surprised to learn that Arya knows much of Aegon and his sister-wives and deduces that she is highborn, as she says "my lord" instead of "m'lord". 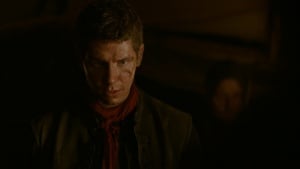 King Robb Stark (Richard Madden) hears Alton Lannister's (Karl Davies) unfavorable reply to the peace terms he brought to Queen Cersei. Lord Roose Bolton (Michael McElhatton) informs Robb that his prisons are full, so Robb orders the construction of a new pen to keep Alton in, and orders him placed with Ser Jaime Lannister (Nikolaj Coster-Waldau) until it is complete. Robb also meets with Talisa (Oona Chaplin) to discuss getting her more medical supplies. Robb asks her to come with him to the Crag to see the Maester for her supplies, which she agrees to. After a long conversation, Jaime brutally kills Alton, planning to escape. When the jailer investigates, Jaime strangles him with his chains and flees. In the morning, he is recaptured and brought back to the Stark camp. Lord Rickard Karstark (John Stahl) demands the Kingslayer's head in retribution for murdering his son, the jailer Torrhen. Catelyn Tully (Michelle Fairley), with the assistance of Brienne of Tarth (Gwendoline Christie), is able to delay the execution until Robb returns from the Crag. She later visits Jaime in his pen, and after being insulted repeatedly, asks Brienne for her sword.

Having lost her dragons, Daenerys (Emilia Clarke) has difficulty trusting Xaro Xhoan Daxos (Nonso Anozie) when he tells her he did not take them. Later, Ser Jorah Mormont (Iain Glen) returns from his search for a ship, and vows to find them. He seeks out the mysterious Quaithe (Laura Pradelska), who knows much of the dragons and the relationship between Jorah and Daenerys. She informs Jorah that although she does not have the dragons, Daenerys is currently with the one who does. At a meeting of the Thirteen, Pyat Pree (Ian Hanmore) tells Daenerys that he has her dragons in the "House of the Undying". Shortly after this revelation, Xaro, with the aid of the Pree, proclaims himself King of Qarth. Pree, having multiplied himself around the room, assassinates the remaining eleven members of the Thirteen, and Daenerys flees with Mormont and Kovarro (Steven Cole).

Prince Theon Greyjoy (Alfie Allen) awakes in the morning and finds the wildling Osha (Natalia Tena) gone from his bed. When he arrives outside, he discovers one of his men has been killed, and Bran (Isaac Hempstead-Wright), Rickon (Art Parkinson), Hodor (Kristian Nairns) and Osha have fled Winterfell in the night. While berating his men for the escape of the children he is challenged by Black Lorren (Forbes KB) for sleeping with the wildling. Theon brutally beats Lorren and then begins a hunt for the two boys and their companions, against the wishes of Maester Luwin (Donald Sumpter). After arriving at a farm, Theon is displeased to learn the dogs have lost the trail, but Dagmer (Ralph Ineson) discovers walnut shells in the farm yard, indicating Bran and Rickon may have passed through. Theon then orders Luwin back to Winterfell so he may interrogate the farm owner. After returning from the hunt, Theon calls the people to the square, and after Luwin's arrival, reveals to them two charred remains which he claims are Bran and Rickon.

Recurring guest actor Karl Davies (as Alton Lannister, the courier between Robb Stark and King's Landing) makes his final appearance, as his character is killed in the episode.

The episode received positive reviews from critics: IGN's Matt Fowler awarded the episode a 9/10, noting that "While A Man Without Honor didn't have as many big, striking scenes as some of the past few episodes, it made up for its lack of face-melting moments with some absolutely fantastic one-on-one scenes.".[2]

This page uses content from the English Wikipedia. The original content was at A Man Without Honor. The list of authors can be seen in the page history of A Man Without Honor. As with A Wiki of Ice and Fire, the content of Wikipedia is available under the Creative Commons Attribution-ShareAlike License.