As Hand of the King, Ned hears a petition from some House Tully bannermen concerning raiding on their holdfasts by Gregor Clegane. He strips Clegane of all lands, titles, and his life and sends a force under Lord Beric Dondarrion to dispense the king's justice. 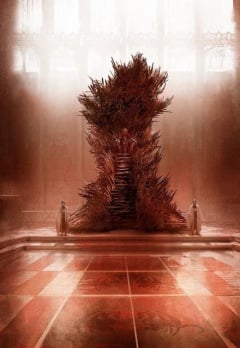 The Iron Throne - By Marc Simonetti©

Eddard Stark is in the throne room where Robert I Baratheon's hunting tapestries have replaced the skulls of the Targaryen dragons. He is extremely uncomfortable after hours on the Iron Throne; the throne's spikes and jagged metal make it impossible to lean back and his shattered leg is throbbing more sharply each minute. Aegon the Conqueror, who commanded his armorers to create the throne out of the swords laid down by his enemies, had said a king should never sit easy. At this point, Ned is damning both Robert and Aegon. His only conciliation is that at least he can sit, as can the three councilors in attendance: Varys, Petyr Baelish, and Grand Maester Pycelle. The rest—including the petitioners, lords, and guards—must stand.

The kingdom has been a tinderbox since Catelyn Stark seized Tyrion Lannister, and Ned has the task of figuring out how best to stanch the hemorrhaging. Ser Karyl Vance explains that the smallfolk kneeling before him are all that remains of the holdfast of Sherrer, while those of Wendish Town and the Mummer's Ford are all dead. The villagers tell of the brutality, murder, rape, and destruction. The raiders were interested not in stealing but in destruction, making them Lannister invaders. Ser Raymun Darry continues by explaining that the people of Wendish Town took refuge in their wooden holdfast but the perpetrators burned the holdfast and shot anyone that tried to run out. The Sherrer holdfast was made of stone, so this tactic did not work.

Ned asks for proof that the raiders were from House Lannister and is told that there were 50 or 100 men, all mounted on war horses and armored in mail with good weapons. Their armor was plain and they flew no banners but the leader was as big as an ox: Gregor Clegane, the Mountain That Rides. Pycelle points out that there are many large men in the kingdom, but the petitioning knights insist there is none as large as the Mountain. Pycelle asks why the Mountain, who holds lands and is an anointed knight, would turn brigand. Ser Marq Piper calls the Mountain a false knight and Lord Tywin Lannister's mad dog. Pycelle asks Ned to remind the knight that Lord Tywin is the father of their gracious queen, Cersei Lannister. Ned sarcastically declares that the court might have forgotten if Pycelle had not reminded them. It is then that Ned looks up to see men going out the door and also spots Septa Mordane with Sansa Stark; he has a flash of anger since this is no place for a girl, but calms himself that the septa had no way of knowing this was no ordinary day.

Littlefinger asks where the knights responsible for protecting these holdfasts were when this destruction was going on. The petitioning knights reply that they had answered the call of their liege lord to marshal at Riverrun and below the Golden Tooth in anticipation of a Lannister invasion. They also declare that now Ser Edmure Tully has dispersed men to guard all the border holdfasts along the Red Fork. Ned thinks to himself that this may be exactly what Lord Tywin wants: to bleed off the strength of Riverrun as Edmure scatters his swords to defend every holdfast.

Littlefinger asks what the knights are looking for from the throne if they have already protected their lands. They reply that, as they still keep the king's peace, they seek permission to retaliate. Ned is thankful that they have asked; Tywin Lannister obviously hoped to provoke a Tully invasion so that he might claim to be the aggrieved party. Pycelle insists that it is Lord Tywin's responsibility to dispense justice to his bannerman, Ser Gregor, but Ned reminds everyone that all justice flows from the king.

Pycelle immediately suggests that, in that case, they should wait for Robert to return, but Ned asserts his right as Hand to speak for the king. He spies Ser Robar Royce, whose father is hunting with Robert, and tells him to ride to the king and advise him of the situation. Ned refuses the petitioning knights permission for vengeance and tells the villagers he cannot give them back what they have lost, but can give them justice. He continues by telling the villagers that the First Men believed that the man who passes judgment should wield the sword, but his injury means he must send another to do his killing. Ser Loras Tyrell asks for the honor of slaying Ser Gregor, but Ned denies him, reiterating that the goal is justice, not vengeance. Ned looks at the assembled lords and orders Lord Beric Dondarrion, Thoros of Myr, Ser Gladden Wylde, and Lord Lothar Mallery to each assemble twenty men. Ned also sends twenty House Stark guards of Winterfell. Lord Beric is given command, as befits his rank. Then Ned announces in the name of Robert that these men are charged with bringing to justice the false knight Gregor Clegane, and that Gregor is stripped of all lands and titles and sentenced to death. Then he tells them to ride at first light so it can be done quickly, and that the throne will hear no more petitions.

At the base of the throne, Varys is still gathering papers when everyone else has left. He declares Ned a bolder man than himself. He goes on to suggest that Ned should have sent Ser Loras, as a man who is an enemy of the Lannisters would do well to make the Tyrells his friends. Varys also reminds Ned that it was a slight not to send Ser Ilyn Payne since he is the King's Justice. Ned does not like the man, but tells Varys that he would prefer not to send a Lannister man to kill a Lannister bannerman. Varys informs Ned that he saw Ilyn in the back and he did not look pleased, likely because he so loves his work.