Gate of the Gods

The Gate of the Gods, by Franz Miklis. © Fantasy Flight Games© 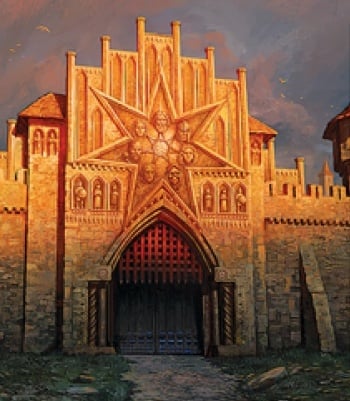 The Gate of the Gods is one of the seven huge gates that surround the huge walls of King's Landing. There are detailed carvings on the gatehouse and over the portcullis with eyes that seem to follow you as you enter the gates. The gatehouse has a windowless guard room. It is at the western corner of the wall. The Kingsroad enters King's Landing from the North at the Gate of the Gods. The gate can be seen from the Broken Anvil.[1]

In the reign of Maegor I Targaryen, Maegor had his own wife and queen, Alys Harroway, tortured to death and executed. Following her death, Alys's body was cut into seven parts and mounted on spikes above each of the seven gates of the city, one of which was above the Gate of the Gods.[2][3]

After their victory in the Battle of the Kingsroad, the Lads had a parley with Lord Corlys Velaryon and Prince Aegon Targaryen outside of the Gate of the Gods before entering the city.[4]

During the Regency of Aegon III, the Hand of the King, Tyland Lannister ordered the city gates to be strengthened so they could better resist attacks from within the city walls.[5] In 135 AC, the Commander of the City Watch, Ser Lucas Leygood was implicated in a plot against the wife of prince Viserys. When men came to arrest him, Ser Lucas refused to go meekly and was killed along with eight others in a savage fight at the Gate of the Gods.[6]

The procession returning Tywin Lannister's body to Casterly Rock leaves King's Landing through the Gate of the Gods. Jaime Lannister feels it would have been more fitting and appropriate if they left via the Lion Gate instead.[7]