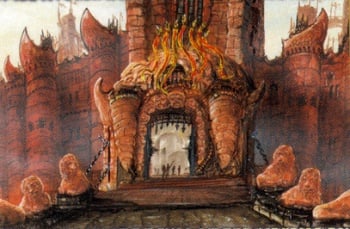 The Lion Gate is one of the seven huge gates that surround the huge walls of King's Landing. It is located near the center of the southwest wall. The Goldroad to Lannisport in Westerlands starts at the Lion Gate.[1]

The gold cloaks stationed at the Lion Gate are called the "Lions".[2]

In the reign of Maegor I Targaryen, Maegor had his own wife and queen, Alys Harroway, tortured to death and executed. Following her death, Alys's body was cut into seven parts and mounted on spikes above each of the seven gates of the city, one of which was above the Lion Gate.[3][4]

The Lions joined the mobs during the riot in the Dance of the Dragons.[2]

During the Regency of Aegon III, the Hand of the King, Tyland Lannister ordered the city gates to be strengthened so they could better resist attacks from within the city walls.[5]

Ser Adrian Thorne was the Captain of the Lion Gate before becoming the Commander of the City Watch in 135 AC.[6]

After the funeral of Tywin Lannister, Gyles Rosby tells Cersei Lannister that he has hired a master stonecarver to sculpt a statue of Lord Tywin to stand eternal vigil by the Lion Gate.[7]

Jaime Lannister thinks it would have been more appropriate if the procession returning Tywin Lannister's body to Casterly Rock had departed through the Lion Gate rather than the Gate of the Gods.[8]