The River Gate is one of the seven huge gates that surround the huge walls of King's Landing. It is known as the Mud Gate by the population of the city.[1] 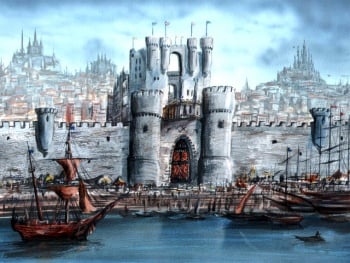 In the reign of Maegor I Targaryen, Maegor had his own wife and queen, Alys Harroway, tortured to death and executed. Following her death, Alys's body was cut into seven parts and mounted on spikes above each of the seven gates of the city, one of which was above the River Gate.[3][4]

In the Fall of King's Landing which occurred during the civil war known as the Dance of the Dragons, thirteen House Hightower knights and a hundred men-at-arms managed to hold the River Gate for eight hours from both attacks without and within the city. Despite this impressive resistance, the other six gates fell swiftly to the Blacks.[5]

Later the same year, a massive riot broke out in the city, Sailors unable to return to their ships attacked the River Gate. By morning the bodies of the captain of the River Gate and three of his serjeants hanged from the gate.[5]

Gendry was once almost rode down near the Mud Gate by King Robert I Baratheon returning from a hunt.[7]

In the aftermath of the arrest of Eddard Stark, the Lannisters close up all the gates of the city, except for the Mud Gate and the Gate of the Gods where people can enter the city but not leave it.[8] After being dismissed from the Kingsguard, Ser Barristan Selmy escapes from the capital through the Mud Gate slaying two gold cloaks in the process.[9][10]

Charged with inspecting the damages from the battle, Tyrion Lannister judges that both the River Gate and the King's Gate are should be replaced.[14] These have not yet being done by the time Queen Regent Cersei Lannister rules the city for her son, King Tommen I Baratheon.[15]

Lord Mace Tyrell leaves King's Landing with his host for Storm's End by the Mud Gate.[16] The smallfolk of King's Landing, mostly women, gater around the Mud Gate to see Ser Loras Tyrell departs with the royal fleet to Dragonstone.[17]