From A Wiki of Ice and Fire
Jump to: navigation, search
"Harrold" redirects here. For other characters named Harrold, see Harrold (disambiguation).

Harrold Hardyng, often called Harry the Heir and sometimes the Young Falcon, is a gallant, handsome squire, and a ward of Lady Anya Waynwood.[1] He is the cousin and heir presumptive of Lord Robert Arryn and would ascend to rule of the Vale as "Harrold Arryn" should Lord Robert die without issue.[1]

Harry is very handsome. He has sandy hair, deep blue eyes, and dimples when he smiles.[1] According to semi-canon sources, he has an aquiline nose, and looks every inch a young lord-in-waiting: straight as a lance, clean-limbed, and hard with muscle. It is said that Harrold has the look of Jon Arryn in his youth.[2] Petyr Baelish says that a wife of Harry would be the envy of every highborn maiden in the Vale, as well as a few from the riverlands and the Reach.[1]

According to semi-canon sources, Harrold's personal heraldry that is displayed on his shield is quartered: the arms of House Hardyng and House Waynwood are displayed in the first and third quarters, respectively, and in the second and fourth quarters is the moon-and-falcon sigil of House Arryn. He is proud of his lineage.[2]

Harrold is the son and only child of a landed knight of House Hardyng sworn to House Waynwood, and the youngest daughter of Alys Arryn and Ser Elys Waynwood. He was taken in as Lady Anya Waynwood's ward at Ironoaks and was raised there.[1]

Shortly after Robert's Rebellion, the infant Harrold became the heir presumptive of his great-uncle Lord Jon Arryn of the Eyrie. Indeed Lord Jon lost his three Arryn heirs in succession: first his nephew, Ser Elbert Arryn, was executed on orders of King Aerys II Targaryen in 282 AC; second his nephew by marriage, Ser Denys Arryn, died at the Battle of the Bells the following year; and third Denys's only son died shortly after his father. This left Harrold Hardyng as the last male descendant of Jon's father, Lord Jasper Arryn.[1]

In 292 AC, Robert was born to Lord Jon Arryn, becoming his heir. Robert became Lord of the Eyrie on Jon Arryn's death in 298 AC, and Harrold was confirmed as Robert's heir.[1] Robert dislikes his cousin Harrold and is resentful of his status, and believes Harrold is just waiting for him to die so that he can take the Eyrie.[2]

Harrold is still young, but despite his youth, he has already fathered a bastard daughter, Alys Stone, on a lowborn servant named Cissy, and has another bastard on the way by a different woman, Saffron.[1][2] 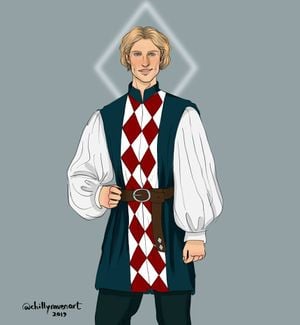 During Petyr Baelish's meeting with the Lords Declarant, Petyr suggests that Harrold should become his ward and a companion to young Lord Robert Arryn, but Lady Anya Waynwood rejects the offer, saying, "You are as bold a thief as I'd ever care to meet." Lord Yohn Royce states that Robert should befriend Harry as his ward at Runestone, but Baelish rejects that offer.[4]

Gossip holds that, despite his youth, Hardyng has already fathered at least one baseborn child, with another on the way. Harry is knighted by Lord Yohn after winning a small melee for squires held at Runestone.[1]

Petyr, the Lord Protector of the Vale of Arryn, arranges a betrothal between Harrold and Sansa Stark, who is masquerading as Petyr's bastard daughter, "Alayne Stone". Lady Anya has agreed to the betrothal in exchange for Petyr forgiving the Waynwood debt that he had acquired, but she insists that Harry must agree to the marriage. Petyr schemes to reveal Sansa's true identity and reclaim Winterfell in her name, with the help of the armies of the Vale once Harry succeeds Robert as Lord of the Eyrie.[1]

Harrold rides with the Waynwoods to the Gates of the Moon, for the tourney for the Brotherhood of Winged Knights. There, he is met by Myranda Royce and Alayne Stone, his betrothed. When Alayne informs Harrold that he is to stay at Falcon Tower, he responds rudely, and insults her status as a bastard. Alayne runs off, desperately embarrassed, and encounters Ser Lothor Brune, who gives Harrold the moniker of "Harry the Arse".[2]

Later, during the feast, after Alayne has danced with several eligible knights, Harry comes and asks her forgiveness for his rudeness and asks her to dance. Alayne agrees, and while they dance, Alayne inquires about Harrold's bastards, to which he answers in all honesty. He tells her of his daughter Alys, fathered on a woman named Cissy. According to Harrold, childbirth left Cissy "fat as a cow", so Lady Waynwood arranged for her to be married off to one of her men-at-arms. Sometime afterwards, Harrold impregnated Saffron, the beautiful daughter of one of the richest spice merchants in Gulltown. Harrold seems to warm up to Alayne, and even bursts into a laugh upon hearing some of her clever japes. Harry asks for Alayne's favor, to wear in the upcoming tourney. She refuses, saying that she has already given it to another.[2]

Harrold is the great-nephew of Lord Jon Arryn. Jon had a younger sister, Alys, who married the uncle of Lady Anya Waynwood, Ser Elys Waynwood. Thus making Harrold and Anya first cousin once removed. Alys and Elys had nine children together, a son named Jasper and eight daughters. The youngest of their daughters married a landed knight of House Hardyng and together they had Harrold.[1]