From A Wiki of Ice and Fire
(Redirected from History of tourneys in Westeros)
Jump to: navigation, search 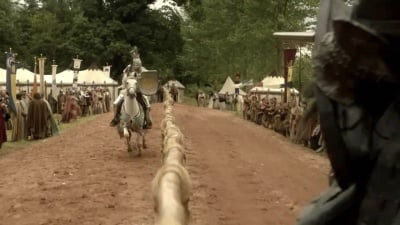 Lord Hightower staged a tourney at Oldtown in honor of King Jaehaerys I Targaryen, who was visiting the city during one of his royal progresses. Ser Ryam Redwyne defeated all comers and was crowned champion of the tourney.[7]

At Maidenpool, Ser Criston Cole gave the melee victor's laurel to Princess Rhaenyra Targaryen, who gave him her favor for the joust.

During this tourney, Queen Alicent Hightower dressed in green, whilst Princess Rhaenyra Targaryen dressed in black and red, creating the origin of the names greens and blacks for respective parties.[10] Prince Daemon Targaryen returned to King's Landing during this tourney from his wars on the Stepstones to swear fealty to his brother, King Viserys I Targaryen.[9]

Reigniting the age-old feud between houses Blackwood and Bracken, Ser Otho "the Brute of Bracken" slew Lord Quentyn Blackwood at this tourney, smashing his helm and face with a blow from a blunted longaxe.

The Ashford tourney provides the setting for The Hedge Knight and is presented in great detail in the short story, as well as in a graphic novel adaptation. Lord Ashford arranged the tourney in honor of his daughter, who reigned as queen of love and beauty and was defended by five champions. The outcome of the tournament is unknown to us, and the event itself came to be overshadowed by the trial of seven that developed out of a confrontation between Ser Duncan the Tall and Prince Aerion Brightflame, resulting in the death of Crown Prince Baelor Targaryen.

The tourney at Whitewalls provides the setting for The Mystery Knight and the Second Blackfyre Rebellion. It was arranged by Lord Ambrose Butterwell to celebrate his second marriage, to a daughter of House Frey. The format was a standard knock-out tournament; only a few outcomes are known to us, and the tourney was aborted prematurely when an army led by Lord Brynden Rivers surrounded Whitewalls. Two knights entered the lists under false names: Ser Duncan the Tall as the mystery “Gallows Knight,” Daemon II Blackfyre as “John the Fiddler.”

This tournament is notable as the first appearance of Barristan Selmy. Selmy, then a squire of ten years, acquired a suit of armor and entered the lists as a mystery knight. He jousted well until being defeated by Prince Duncan the Small and unmasked. He was dubbed Barristan the Bold for his deeds that day.

Only Ser Barristan Selmy's entry in the White Book tells of this tourney. He defended the passage against all comers.

Lord Tywin Lannister, the Hand of the King, hosted a tourney at King's Landing to celebrate the tenth year of King Aerys II Targaryen's reign.[16]

The information about this tourney is problematic because some details in A Storm of Swords conflict. In response, George R. R. Martin suggested that the outlaw Simon Toyne was already dead by this time and the elderly Ser Barristan Selmy misremembered.[18]

Possibly the most pivotal event prior to A Song of Ice and Fire, this tourney took place more than a decade before the events in A Game of Thrones, and few details have been disclosed so far. The tourney was held by Lord Walter Whent in honor of his daughter and to show off his house's power; it was the greatest tourney of its time and perhaps ever. Crown Prince Rhaegar Targaryen was champion, and in the end chose Lyanna Stark as queen of love and beauty. This was scandalous in that, not only was Rhaegar already married (to Princess Elia Martell), but Lyanna herself was betrothed to Lord Robert Baratheon. Rhaegar's indiscretion culminated in his abduction of Lyanna a year later, which touched off the War of the Usurper and brought an end to Targaryen rule. Also at this occasion, fifteen-year-old Ser Jaime Lannister was admitted into the order of the Kingsguard, and a mystery knight, the "Knight of the Laughing Tree", appeared in the lists to fight for the honor of Howland Reed of Greywater Watch.

After King Robert I Baratheon's forces defeated the Greyjoy's Rebellion, a tourney was arranged in celebration at nearby Lannisport. Lord Jorah Mormont, recently knighted for his valorous acts in the final battle at Pyke, won the tournament and with it the hand of Lynesse Hightower, whose favor he wore.[20]

According to Ser Balman Byrch, Queen Cersei Lannister was not present at the tourney or else she would have been crowned the queen of love and beauty.[17]

Lord Tywin Lannister had brought a retinue to watch his son, Ser Jaime Lannister, in the tourney.[24] 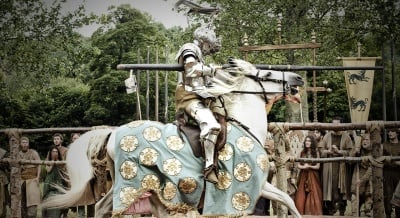 This tourney is described in great detail over a number of chapters in A Game of Thrones. It is held at King's Landing in honor of Lord Eddard Stark, the newly appointed Hand of the King to Robert I Baratheon. It includes an archery tournament, a melee, and a round-based jousting competition. The jousting competition ends when Ser Gregor Clegane attacks Ser Loras Tyrell after their tilt. Sandor Clegane steps in and saves Ser Loras's life, fighting his own brother to an impasse. After King Robert puts a stop to the fighting, Ser Loras yields the final tilt to Sandor in gratitude.

Only the end of this event, a large melee of one hundred and sixteen knights, is described in the books, Chapter 22 in A Clash of Kings and Chapter 20 in A Feast for Crows. The tourney is arranged by the self-proclaimed King Renly Baratheon (younger brother of the late Robert I Baratheon) at Bitterbridge on his march towards King's Landing during the War of the Five Kings.