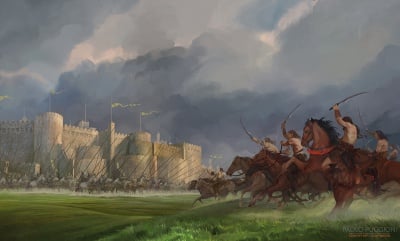 The Century of Blood is the name given to the century that followed the Doom of Valyria. The destruction of Valyria and the power of the Valyrian Freehold in 102 BC left a power vacuum in Essos. One of the few surviving dragonlords, Aurion, who had been in Qohor at the time of the Doom, proclaimed himself the first Emperor of Valyria and marched a Qohorik army to claim what remained of Valyria. They were never seen again.

The Free City of Volantis, at the time the mightiest of the Free Cities, regarded itself as the rightful successor of the dragonlords. The so-called tigers took control of Lys, Myr, and the southern reaches of the Rhoyne. However, when they attempted to take control of Tyrosh, resistance began. Eight of the Free Cities (all save for Lorath) eventually found themselves involved in the power struggle. Alliances were made between cities, and even with the Westerosi Storm King Argilac Durrandon and Lord Aegon Targaryen of Dragonstone.

Meanwhile, the Dothraki rode out of the east, and the grasslands exploded into war. Khal Mengo united all sixty khalasars and went west. The Tall Men of the Kingdom of Sarnor were ignorant to the threat the Dothraki posed, however, and even attempted to use them in their own wars. Mengo and his khalasar burned fields, farms, and towns, returning the lands to their original, wild state. The Dothraki fought for a century, destroying all Sarnori towns save for Saath, several Ghiscari and Qaathi cities, a Valyrian colony, an Ibbenese town, and a former settlement from the Kingdom of the Ifequevron. Famous battles include the Field of Crows, in which the Sarnori, after the fall of Mardosh, finally united against their enemy but lost to the Dothraki, resulting in the destruction of Sarnath a fortnight later, and the Three Thousand of Qohor, in which Khal Temmo attempted to conquer Qohor with his khalasar. After defeating the forces and sellswords hired by Qohor, the Dothraki returned to the city the next day to find three thousand Unsullied. They battled or three days, during which the Dothraki charged eighteen times.

The Century of Blood resulted in destructions and power shifts, the consequences of which are still apparent to this day. Read more...