Guildhall of the Alchemists 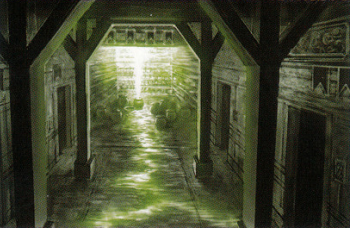 The Guildhall is made of black marble, a warren of twists and turns.[1]

Wildfire, the material that makes the Alchemists' Guild infamous, is prepared in stone cells beneath the guildhall. Above each cell is a room filled with sand. The floor below has protective enchantments placed upon it. Any fire within the cell will cause both floors to fall and the sand to drop, smothering the fire instantly.[1]

The Gallery of the Iron Torches is the receiving area for guests. It is a long chamber, empty save for the columns of wildfire surround black metal columns. The iron torches are rarely lit, usually save for important guests. The walls and floor of polished black marble allow the flames to reflect on their surface and bathe the hall in emerald radiance.[1]

Tyrion Lannister tours the Guildhall as part of his inspection to make sure the preparations for the defense of King's Landing during the War of the Five Kings is coming along at the proper pace.[1]