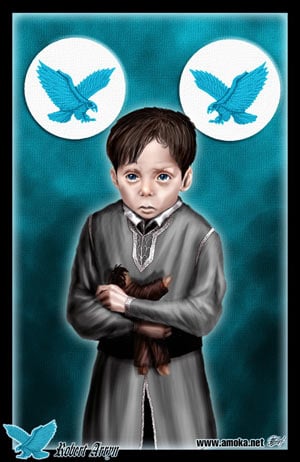 The shaking sickness[1] is a condition similar to epilepsy.

The shaking sickness causes its sufferers to twitch,[2] tremble,[1] and have violent seizures.[3] Such seizures are often treated with dreamwine and leeching, with the belief that they are caused by bad blood resulting in rage.[3][4]

Member of House Targaryen have historically not been afflicted by diseases such as the shaking sickness.[5]

When people started to die of a mysterious sickness at Dragonstone, Maester Culiper determined it was not the shaking sickness. It turned out to be poisonings by Androw Farman.[6]

Robert Arryn, the young Lord of the Eyrie, suffers from the shaking sickness.[1]

When Edmure Tully, Lord of Riverrun, meets a Frey girl with a twitch, he wonders if she has the shaking sickness.[7]

During a shaking fit, Robert kicks Ser Lothor Brune and wets himself.[4]

Robert Arryn, Lord of the Eyrie, stood in the doorway, clutching a ragged cloth doll and looking at them with large eyes. He was a painfully thin child, small for his age and sickly all his days, and from time to time he trembled. The shaking sickness, the maesters called it.[1]

Perhaps a pinch of sweetsleep in his milk, have you tried that? Just a pinch, to calm him and stop his wretched shaking.[9]