Josmyn is tall and skinny like a spear.[1] He has greasy mouse-brown hair[3] and downy peach fuzz on his cheeks.[3][1]

Peck can be shy.[4] Despite his age, he is a promising warrior[3] and has good martial instincts.[5]

During the Battle of the Blackwater, young Josmyn fights on behalf of King Joffrey I Baratheon. He kills two knights, wounds a third, and captures two more. For his efforts, the Iron Throne awards him a sword, a suit of armor, a choice of any warhorse in the royal stables, and knighthood when he comes of age.[3]

Josmyn is among those that testify against Tyrion Lannister in his trial for the death of King Joffrey I Baratheon, witnessing that Tyrion had picked the wedding chalice up and poured the last of its contents onto the floor during the royal wedding.[6]

Ser Jaime Lannister takes Garrett Paege, Lewys Piper, and Josmyn as squires when he rides for Riverrun.[1] Jaime has Peck retrieve his golden hand when the Lord Commander of the Kingsguard dines with the castellan of Lady Ermesande Hayford.[1]

Jaime has Josmyn throw the head of Vargo Hoat into the Gods Eye,[1] and the squire finds a gelding for Pia to ride.[4]

While at Darry, Jaime urges a bashful Peck to take Pia as a lover, if she will have him, though he commands him to be kind to her. Jaime suggests they sleep in the unused bed of Lancel Lannister, Lord of Darry.[4] As the host travels west, Peck and Pia regularly have sex in the corner of Jaime's tent.[5]

After arriving at the siege of Riverrun, Jaime has Josmyn set up their tent in the Lannister camp between the Tumblestone and the Red Fork.[5] Jaime has Peck pour wine for Edmure Tully, Pia clean the captive lord's clothes, and Lewys prepare bathwater.[7]

Jaime achieve the surrender of Riverrun, although Ser Brynden Tully escapes the besieging army. Queen Cersei Lannister sends a letter to Riverrun begging Jaime to aid her against the Faith of the Seven, but Jaime has Peck burn his twin's letter.[8]

Peck carries the peace banner when Jaime's band arrives at Raventree Hall. Once the siege of Raventree has been resolved, Peck rides with Jaime and Hoster Blackwood to Pennytree, where they share wine.[9] 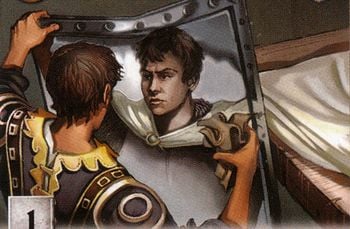 Peck imagining himself as a Kingsguard, by David Sourwine © Fantasy Flight Games

Jaime: Peck was a hero on the Blackwater. He slew two knights and captured two more.


Daven: You must be more dangerous than you look, lad. Is that a beard, or did you forget to wash the dirt off your face? Stannis Baratheon's wife has a thicker mustache. How old are you?
Josmyn: Fifteen, ser.


Daven: You know the best thing about heroes, Jaime? They all die young and leave more women for the rest of us.[5]
—Jaime Lannister, Daven Lannister, and Josmyn

The boy has good instincts.[5]