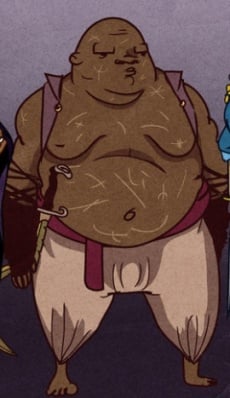 Poisoned locusts were used in an attempt to assassinate Daenerys Targaryen by means of a bowl of edible honeyed locusts laced with poison. Honeyed locusts are sweet and tasty and it must have been hoped that they would tempt Daenerys to take a bite. Whether Daenerys would have had to consume just one locust or a number of them in order to successfully kill her is unknown.

While in their box in Daznak's Pit, Daenerys Targaryen notes that her husband, Hizdahr zo Loraq, has well stocked it with flagons of chilled wine and sweetwater, figs, dates, melons, pomegranates, pecans, peppers - and a big bowl of honeyed locusts.[1]

Upon entering the box alongside Daenerys, Strong Belwas immediately spots the bowl of honeyed locusts and begins to crunch them by the handful, while Hizdahr tries to encourage Daenerys to eat them as well. Daenerys declines.[1]

During the matches they view, Belwas finishes the entire bowl of honeyed locusts on his own. After Barsena Blackhair is killed by a boar, Belwas rubs his swollen stomach and remarks that he is sick in his belly. A little later he says that he has eaten too many locusts, and he has a queasy look on his face. When Daenerys's black dragon Drogon suddenly appears above the pit amidst the uproar Belwas gives a moan, stumbles to his feet and falls to his knees. As Drogon consumes the boar and Barsena Blackhair Strong Belwas is retching nosily – the poison is taking effect.[1]

After Daenerys disappearance on Drogon strong Belwas lingers at the door of death in the temple, under the care of the Blue Graces.[1] He manages to survive.[2]

Sometime thereafter Skahaz mo Kandaq informs Ser Barristan that he has the poisoner – Hizdahr zo Loraq's confectioner. However the confectioner was just a catspaw, as the Sons of the Harpy took the confectioner's daughter and swore that she would be returned unharmed once the queen was dead. Belwas and the dragon saved Daenerys, according to Skahaz, though no one saved the girl. He informs Barristan that she was returned to her father in the black of night in nine pieces.[3]

Skahaz names Hizdahr as the poisoner. Ser Barristan Selmy thinks about Hizdahr, and recalls how he had urged Daenerys to try the honeyed locusts, though he never touched one himself.[3] Barristan decides he wants to question the confectioner himself. He also wonders if the poisoned locusts were actually meant for Hizdahr, as his death would have smashed the fragile peace of Meereen.[4]

Those are very tasty. You ought to try a few yourself, my love. They are rolled in spice before the honey, so they are sweet and hot at once.[1]

—Hizdahr zo Loraq urging his wife, Queen Daenerys Targaryen, to eat some of the locusts

And he could still hear Hizdahr, urging his queen to try the honeyed locusts. Those are very tasty … sweet and hot … yet he never touched so much as one himself[3]