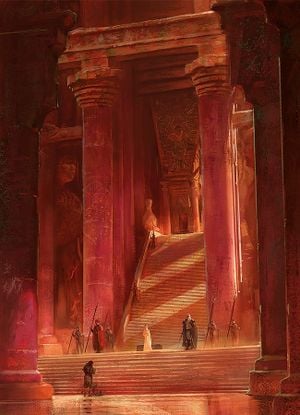 "Dance with dragons by GRR Martin" by Marc Simonetti©

King of Meereen is the title used by the Meereenese monarchs of old.[1] Meereen eventually fell under the rule of the Great Masters, but in 300 AC, Daenerys Targaryen restored and claimed the monarchy of Meereen, using the title Queen of Meereen.[2]

Daenerys Targaryen is introduced as "Queen of Meereen" as she holds court.[2]

Daenerys weds Hizdahr zo Loraq, through which he becomes Meereen's king.[6] After Daenerys disappears on Drogon, Hizdahr claims the rule over Meereen as King of Meereen.[4] Skahaz mo Kandaq convinces Ser Barristan Selmy that Hizdahr played a part in the attempt on Daenerys's life.[4] Together with Grey Worm, Barristan and Skahaz arrest Hizdahr and install a council to rule the city in Daenerys's absence.[7]