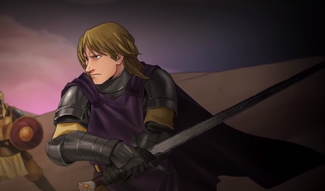 Vorian Dayne, the last King of the Torrentine, as depicted in Game of Thrones History and Lore.

King Samwell Dayne once sacked Oldtown, the seat of the Kings of the High Tower.[3]

During Nymeria's War, Princess Nymeria and Prince Mors Martell declared their supremacy over Dorne.[2] The Martells soon met the Kings of the Torrentine in war, facing against King Vorian Dayne, considered to be the greatest knight in Dorne. However, Vorian was defeated and forced to bend the knee. Vorian was subsequently sent to the Wall to join the Night's Watch, alongside the other conquered kings.[4] The Daynes were reduced from petty kings to powerful lord bannermen of House Martell, and later aided the Martells in subduing King Yorick V Yronwood.[2]