Ser Roger Reyne, known as the Red Lion, was a Lord of Castamere and head of House Reyne. He was a famous knight and considered one of the deadliest men of the westerlands.[3]

Roger became Lord of Castamere after the death of his father Robert during the Peake Uprising in 233 AC.[3] According to a semi-canon source, Roger executed seven captive Peakes at Starpike before being halted by Prince Aegon Targaryen.[4]

Roger and his younger brother, the cunning Reynard, were often at Casterly Rock once their sister Ellyn married Tion Lannister, the son of Lord Gerold Lannister and heir to the Rock. The brothers returned to Castamere after Tion's death, however, as Gerold began to groom Tytos Lannister for leadership. Ellyn was later rewed to Walderan Tarbeck, Lord of Tarbeck Hall.[3]

Ca. 255 AC, House Tarbeck angered King Aegon V Targaryen through their territorial demands, according to a semi-canon source.[4] Lord Tytos sent Lord Denys Marbrand to capture the Tarbecks, but Roger came to his sister's aid and his soldiers slew the Marbrand men in the night before they reached Tarbeck Hall. Reynard convinced Tytos that it was a misunderstanding, however, and the Lord of the Rock pardoned the Tarbecks and Reynes.[4]

Roger and his sister were present at the feast in the westerlands where the betrothal of Genna Lannister and Emmon Frey was announced. While Ellyn laughed, the Red Lion left the hall in anger.[5] 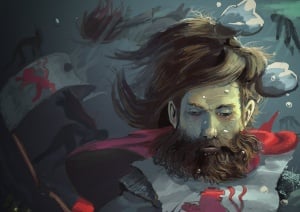 The Red Lion of Castamere, drowned within his own seat

In 261 AC after the war, Ser Tywin Lannister, the eldest son and heir of Lord Tytos, desired to reaffirm House Lannister's control over the west. The Reynes and Tarbecks rose in rebellion against their liege lord, Tytos. Roger's host arrived too late to prevent Tywin from exterminating the Tarbecks at Tarbeck Hall,[5] and the outnumbered Reynes failed to defeat Tywin in a surprise charge. Roger became feverish from a crossbow bolt and Reynard led the surviving Reynes back to Castamere, where they took refuge in its mines.[3]

According to a semi-canon source, Tywin declined Reynard's terms and Roger's offer of single combat.[4] Instead, the Lannisters diverted a nearby stream into Castamere, drowning all within.[3] A song known as "The Rains of Castamere" was composed as a commemoration of the event.